A little boy, born with congenital nephrotic syndrome, who has been waiting his whole life to find a suitable match for a kidney transplant has finally been given his wish.

Matthew Pietrzyk from Glenfield in Leicestershire, who featured in our BBC Lifeline Appeal in 2015, has finally been given the chance of life after a donor came forward following his mother’s social media campaign.

Nicola Pietrzyk has worked tirelessly for the last decade to raise awareness of Matthew’s condition in hope of finding a suitable donor for him. 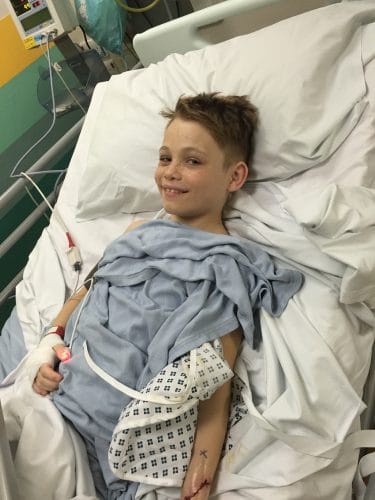 When Matthew was just two-years-old Nicola donated one of her own kidneys, but that sadly failed and Matthew was left on dialysis for 12 hours a day and having to take 18 tablets.

As a young boy he was never able to go swimming, or enjoy things like sleepovers with his friends.

After eight years on the Organ Donor Register, Matthew finally found a suitable match in Edward Batch, a fellow resident of Leicestershire, who got in touch with Nicola via Facebook after seeing the appeal.

In 2015, Edward ran the Leicester Marathon in Matthew’s honour and also volunteered to be tested to see if he was a suitable match.

“On the 28th of July after much planning Matthew received his gift of life! The donor, Edward a local Leicestershire man came forwards to be tested last year after seeing our social media campaign and offering to run the Leicester Marathon wearing a pink vest to help raise awareness for organ donation.

“After a very long anxious wait, of almost a year on the 19th of May this year it was confirmed that Edward could donate to Matthew.”

Nicola went on to apologise to the 130,000 people who have been following the campaign, saying: “We are so sorry that we haven't told you all sooner but after our last experience…we decided to keep the information to ourselves until we had good news to share… We hope that people won't be too disappointed that we have been secretive, but we were just very worried about the outcome and still have a long way to go, there are other issues to address and it will not be a quick fix but it's definitely a great start!”

Writing about Matthew’s condition Nicola continued: “Matthew had actually become antibody sensitive to 99% of the UK population making Edward a very unique individual that was a match but was also medically fit enough and willing to help.

“We are almost at the two week post-operative point and Matthew is still considered high risk for rejection, however so far so good, his levels are up and down but that's to be expected.

“We would have to add that this has happened due to the amazing Ward 1 staff and transplant surgical team at Birmingham Children's Hospital, also the Histocompatibility and Immunogenetics department at the QE Birmingham.

“In particular I would like to thank renal consultant Dr Milford who has been busy talking with other experts to ensure that Matthew would have the very best chance of this transplant working. We genuinely cannot thank them all enough!!!”

Speaking the BBC Radio Leicester, Nicola added: “It’s been a rocky couple of weeks and we’ve been told to expect a rocky six months. Transplant is the best possible thing for anyone waiting for a kidney, however, it’s not, there you go, you are fixed, goodbye! It doesn’t quite work that way, but he’s doing really, really well, he’s named his kidney Eddie Junior and he want’s two birthdays a year – he’s really milking it!

“We are just in shock, we still can’t believe it and Matthew is just so happy.”

Matthew’s story has also featured in our Making Every Kidney Count campaign; a campaign with the objective of funding more research in the area of transplantation. Matthew’s story featured alongside a project which aims to improve transplant opportunities for sensitised patients.