Edwina tells how she got into science and medicine

My earliest memory of science being interesting was when I started science lessons at school. I went on to study Medicine and was a medical undergraduate at Somerville College, Oxford and University College Hospital, London. I undertook renal training at Yale in USA and at Charing Cross Hospital. Doing clinical nephrology training in these academic institutions reinforced my desire to work in research, as I found the prospect of gaining knowledge and changing practice immensely exciting.

It wasn’t easy though; my medical career began at a time when female clinicians and researchers faced some significant negative attitudes. I was told my ambitions were unrealistic as most women do not want to become consultants and that it was immoral to have two incomes in one family!

While at Charing Cross Hospital, I was extremely fortunate to work with Hugh de Wardener, who became a very supportive and inspirational mentor to me. A pioneering doctor in the treatment of kidney disease, Hugh performed the first renal biopsies in Britain enabling accurate diagnosis. He wrote the first clinical nephrology textbook The Kidney (1958) and founded what is now Kidney Research UK in 1961. 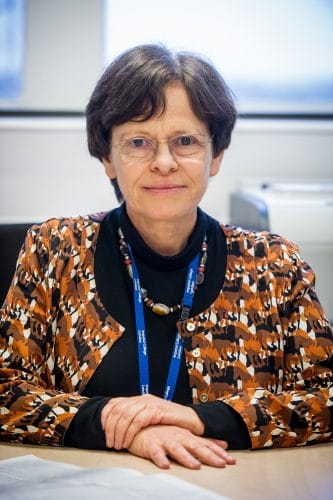 Hugh pioneered kidney dialysis in Britain and inspired many generations of young physicians and nephrologists during their training. He was a clinical researcher par excellence. He always wanted to know ‘how’ and ‘why’ and do the best for his patients and motivated many – like me – to continue his philosophy of clinical research.

My second mentor was Dr Frederic Finkelstein, Clinical Professor of Medicine at Yale University. I did my initial research with him and he’s been a huge influence on my thinking on patient outcomes and the type of research I do. Fred’s still working into his mid 70s and is a great role model for older researchers. We’ve stayed in touch ever since we worked together in Yale, becoming great friends as well as colleagues. I did my first papers with Fred, we’ve published numerous pieces of work together and we have just published a review article in Kidney International which summarises our person-centred approach to older patients on dialysis.

What worries me is that what I’ve done to progress my career might not be replicable nowadays; I undertook a lot of clinical research while in a full-time NHS post. I was able to drop some clinical work to devote more time to research. Effectively, I worked the system – something which I doubt would be possible in this day and age.

I’m currently running the Frail and Elderly Patient Outcomes on Dialysis (FEPOD) study comparing outcomes on Automated Peritoneal Dialysis and haemodialysis with conservative care. This project reflects my main clinical and educational interests, which are peritoneal dialysis, dialysis outcomes in the elderly and renal palliative care.

I’ve been the principal investigator for Broadening Options for Long-term Dialysis in the Elderly (BOLDE). Looking back on my research career to date, I would say that the achievement I’m the most proud of involved instigating and running multi-centre studies that have changed clinical practice, namely:

Kidney Research UK funded one of my pivotal projects from 2007-2010; ‘Patient Choice’ was the first initiative for Kidney Research UK to facilitate research in dialysis through collaboration with Baxter Healthcare in the BOLDE study. Centred at the Imperial College Kidney and Transplant Centre at Hammersmith Hospital, London, this multi-centre study focused on improving quality of life for older renal patients on dialysis and explored factors affecting the patient decision-making process and patient choice.

The results of the study were first published in 2010, with subsequent secondary publications by a young researcher who performed the study. This fulfilled an additional goal of Baxter Healthcare to support career development by igniting a long-term research interest and helping to develop appropriate skills and expertise. The BOLDE study led to the development and production of an educational Dialysis Choices DVD to provide an insight into different dialysis experiences as told by six older patients.

The project subsequently enabled all parties to apply the same model to two further studies. First, the Yorkshire Dialysis Decision Aid project (YoDDA) project, focusing on choices over the methods and type of dialysis for patients, which finished in 2013. This resulted in the design and production of the Dialysis Decision Aid booklet which can be downloaded or ordered online. Second, a study that will explore the benefits of low glucose peritoneal dialysis therapy, which commenced in 2013 at Keele University in Staffordshire.

Being female in science

Reflecting on my career to date, I’d say that being female has never been an advantage. When I had my children, I only took 2-3 months maternity leave, so that I didn’t have a problem getting back into work. There was a long gap in my CV with few publications over the period when my children were very young and I had to manage several years as a single parent when my marriage failed.

Following the break-up of my marriage, I could never have managed without the psychological and financial support from my mother, who was determined that I would have an independent career, having not been able to do this herself. I was able to get a very good housekeeper, who made it possible to run a family as a single parent alongside very demanding clinical research. Both boys were healthy and happy with the childcare arrangement; if that hadn’t been the case, life would have been made much more difficult.

I pursued my career with grit and determination, somehow juggling home and work pressures – a challenge which I know many female researchers face to this day. I missed out on a lot of family time, as I spent my evenings and weekends writing my papers. One of my children called my laptop ‘my baby’, which smarted at the time, but now that both my sons are in their 30s and following academic paths as junior doctors, I’m reassured that it can’t have affected them too badly. What’s more, it fills me with a deep sense of pride that they have both decided to follow a similar path.

I’ve published extensively on peritoneal dialysis and dialysis in the elderly and have been involved in the production of several books, including:

I could have retired by now, but I still get a buzz each time I get a paper published. The work is incredibly rewarding, because the end result covers everything from having papers published, to achieving a positive effect on frontline clinical outcomes, influencing a major and miserable long-term condition. It’s also extremely satisfying to see the people I’ve supervised as research fellows progressing and developing themselves as experts.