Kidney disease forced Angela Riley to cut short a career in social care, but she is determined to keep helping people as a campaigner for change and as a community ambassador volunteer for Kidney Research UK.

Angela, who has type 2 diabetes, was diagnosed with chronic kidney disease (CKD) in 2020. Although 40 per cent of people with diabetes go on to develop CKD, the news came as a nasty surprise to Angela.

“It came as a total shock. I knew that diabetes could affect your kidneys but I didn’t really know how and I had never even heard of CKD,” says Angela, who lives in Glasgow.

“I remember I’d been doing really well managing my diabetes and I had lost five stone. But then I became ill with anxiety and depression, just as Scotland went into lockdown, and I started putting the weight back on again. Around about the same time I noticed I was becoming very breathless. Both ankles and my left leg were extremely swollen too – and brick hard – so I contacted my GP.”

Concerned that there might be something wrong with her heart, Angela’s GP referred her for an echocardiogram. But it soon became clear there was an issue with her kidneys.

“I was sent to my local hospital for lots of tests and was told I had a problem with my kidneys, but nobody mentioned CKD to me until the second or third appointment when I told them I needed to tell my employers what was wrong with me.

“They kept mentioning something called an eGFR rate. I didn’t know what it was so I looked it up online and found out it stood for my estimated glomerular filtration rate (eGFR) – a test that measures your level of kidney function and determines your stage of kidney disease. From that I worked out that I probably had stage 3 CKD.

“After that, I had blood tests every three to six months and my outpatient appointments were by telephone for about a year. In April 2022, my eGFR rate dropped rapidly and my blood pressure was sky high. It was then that my consultant told me it was no longer a case of if I will need dialysis but when,” says Angela.

“My medical team have been great. They’ve given me lots of information about dialysis and explained the process of getting everything set up. They’ve also spoken about how I can get on the transplant list.

“I don’t really think I took it all onboard at first. I remember telling my husband ‘They kept talking about a transplant list today but I’m not going to need a transplant – I’ll be fine with dialysis’. But then it hit me that dialysis isn’t a cure, it’s a treatment. So, unless I do get a transplant I’ll be on dialysis for the rest of my life. That realisation hit me as if someone had slapped me. It hadn’t sunk in until then.” 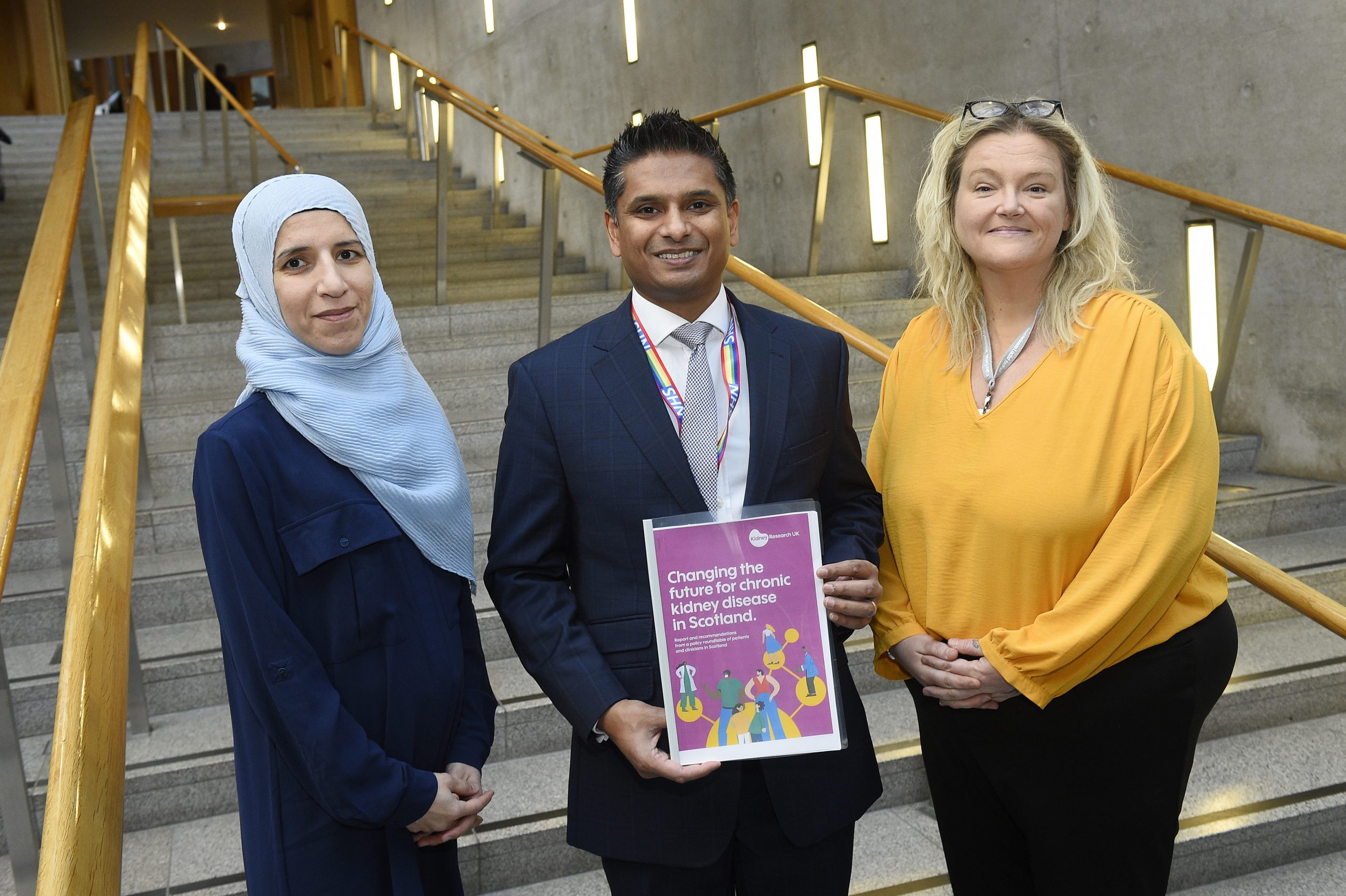 Forced to take ill health retirement from her job as an addiction worker, where she helped people with alcohol and drug problems, Angela was keen to find another way to support her local community.

Through her involvement with a Facebook group called Chronic Kidney Disease UK, Angela volunteered to take part in a roundtable event organised by Kidney Research UK in September 2022.

She joined other patients, clinicians, researchers and representatives from the Scottish Renal Registry, the Scottish Donation and Transplant Group, the Clinical Trials Network and the UK Renal Data Network at the event to identify opportunities to transform outcomes for people with CKD in Scotland. Their conversations revealed that kidney disease is often invisible and overlooked within the country’s healthcare system.

“Until I took part in the roundtable, I had no idea that CKD was more prevalent than cancer in Scotland. Despite this, there is no unified system to tackle kidney disease,” says Angela, who is supporting our Ken Yer Kidneys campaign to urge the Scottish government to develop a national strategy to combat chronic kidney disease.

“If you have CKD you should have access to high quality treatment, regardless where you live – but that’s not happening and that’s shocking.”

“If we had standardised guidelines that everyone could follow people would be better educated about kidney disease and patients would be able to get help sooner. And this should include educating people with diabetes to help them reduce their risks of developing CKD.”

Angela, who signed up to become one of our community ambassadors shortly after the roundtable, also believes that there should be more face-to-face peer support for people with kidney disease. She hopes to be able to offer her help in this area.

“Sometimes, as a kidney patient, you just want to speak to someone who knows what you are experiencing because they’ve been through it themselves. We need more people with lived experience to help other patients and also educate people who may be at risk of getting CKD,” says Angela.

“I’m not a medical professional. I can’t do anything about making someone physically better and I can’t cure kidney disease, but as a patient I can offer support to other patients and I can help the campaign to develop a national strategy to ensure that we get the best treatment possible.”

Join us to campaign for a national strategy to combat chronic kidney disease in Scotland.