Up to 100 farmers and their tractors will be gathering at the Farmyard Brew Company in Cokerham on December 27 for a sponsored event to raise money for kidney research.

Peter Hewitt, a 42-year-old farmer from Cokerham, went through a transplant operation in 2007 after secretly having tests to see if he could be a match for his sibling. Mark had been diagnosed with Alport syndrome, a genetic kidney disease, when he was just five, but it would only start to affect him when he was a teenager.

Seeing his brother become poorly as the disease progressed, drove Peter to see if he could be a potential donor after his mother was ruled out. It was a huge relief to the family when the siblings were found to be a complete match. Peter who was 27 at the time, was working back at the farm just a week after the operation.

Peter and Mark on the farm

Peter said: “There was never a doubt in my mind when I went for those tests. Mark was just so incredibly ill, and I felt like I had to do something. It was all very emotional when I told him, I didn’t want to give him false hope, so I had to do it in secret but the surprise from him and those around us was something I will always remember. We are one big close-knit family, Mark, his wife Sandra and the kids all work on the farm with us, so we are never far away from each other. Now that myself and Mark share an organ, we are bound by a lot more than just being siblings.” 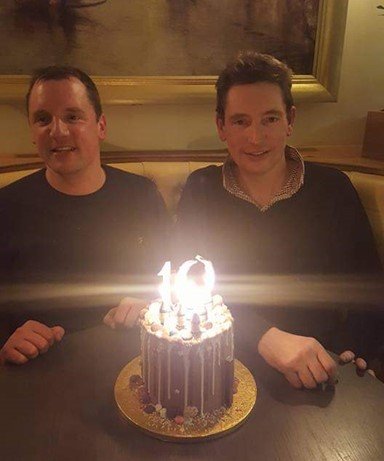 Peter and Mark celebrating 10 years since the transplant operation

Taking on a challenge

Both brothers are now enjoying their lives to the full, with Peter due to take on another huge challenge, having signed up for this year’s London marathon with the aim of raising £10k for kidney research. The tractor run is the latest event in a series of fundraising activities that have been supported by the local community to get him to his total.

Peter continued: “I haven’t run in nearly 30 years, so it was a bit of a shock to be told that I had a place confirmed for the marathon. I started running twice a week, then I got to three and I slowly built up my stamina. The moment the community found out that I was fundraising for Mark and Kidney Research UK, everyone rallied around us and wanted to help in any way they could. I can’t believe nearly 100 farmers will take part in the tractor run, and the local vet has even sponsored a hog roast for everyone attending. It is a bit overwhelming to see the support that everyone has given us, and the money raised will be so vital to help people like Mark live a better life.  I am so grateful to everyone who has supported me.”

Fundraising down at the farm

Since donating his organ, Peter has thrown himself into his fundraising efforts. He recently auctioned a calf from his farm. which would typically sell for £300. However, when everyone found it was for charity, the auctioneer really pushed the sale and it raised £1,600, thanks to Peter’s good friend David Townley who was inspired by his story.

Local farm suppliers have also raised £500 each towards Peter’s marathon fund and the local vets kept a collection bucket at their Christmas drinks to raise money for the charity.

Emma Ronan-Peate, community and events fundraising manager at Kidney Research UK said: “Peter’s story is a fantastic example of the impact a local community can have over a really important issue. The support from the Lancashire farmers has been absolutely incredible and will really help Peter over the finishing line. Kidney disease is a terrible disease that impacts so many people, but with more research and community support, we can work together towards a life without the condition.”

Peter will be running the 2023 London Marathon in April and aims to run the race in three hours and twenty-five minutes, which would be a record amongst runners who have supported the charity.

The Lancashire tractor run will take place from 9am on Tuesday 27 December at the Farmyard Brewing Company in Cockerham where anyone is welcome to attend and donate to the cause.  For those wishing to bring their machines, it will be £15 a tractor which includes a hog roast as well as access to a fully stocked bar. To support Peter and his fundraising efforts, visit his fundraising page. 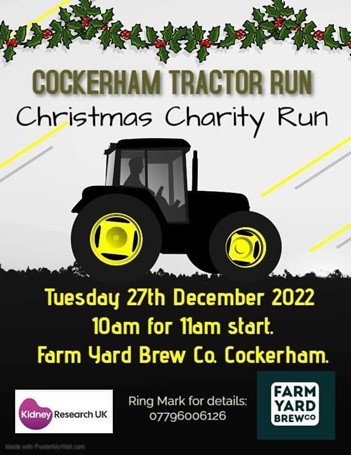