Like many people when they get diagnosed with kidney disease, Darren Daniel felt worried and anxious about his condition, and wasn’t sure where to turn for help and advice.

In 2017, Darren had started to display some worrying symptoms but put it down to working too much and being too busy. It was only when he woke up one Sunday morning with blurry vision and feeling “unusual” that he sought medical advice, with NHS Direct telling him to go to hospital as soon as possible.

“I went to the hospital and they tested me for a stroke, because they thought that I may have had a mini stroke in my sleep and they knew something wasn’t right”, he said.

“I had a CT scan and an MRI scan and they couldn’t see anything wrong on the brain, but a junior doctor came along and asked if they’d tried testing my kidney function. The senior doctor didn’t agree but the junior really wanted to test me and said all the symptoms were pointing that way.

“Obviously when they tested my urine it showed a lot of protein in it, and they knew than it was my kidneys – so I was saved by a junior doctor who wouldn’t take no for an answer!”

Darren was referred to a specialist renal team and they discovered that he had focal segmental glomerulosclerosis (FSGS), a disease in which scar tissue develops on the glomeruli, the tiny network of blood vessels in the kidneys that filter waste from the blood.

It was at this stage that he found himself feeling particularly unsure and confused, as he hadn’t previously imagined his symptoms were those of kidney disease.

“I was just baffled when I got diagnosed, you don’t really hear anything about kidney disease, you just hear about transplants or dialysis. I was really scared, really worried because I didn’t know where to turn or what to do. It was all really daunting, to be honest.

“My medical team gave me some information to read up on after diagnosis, there were some leaflets and website links within the information but I found it a little strange that there was no in-depth conversation about it. But for me, I preferred not to speak to anyone. I needed that time alone to process everything and then have my own time to read and understand everything.” 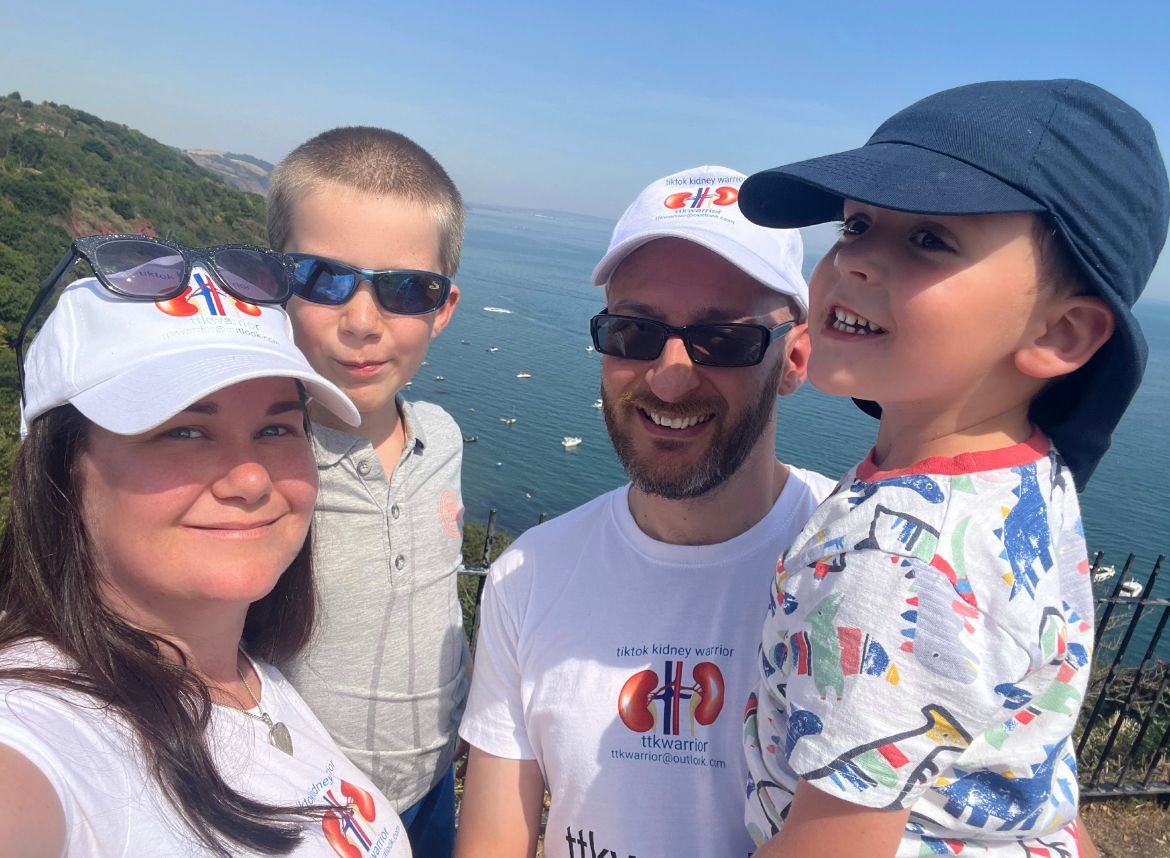 Darren and family on holiday

“I read lots of medical journals, I joined some groups on Facebook and searched for what charities are out there and that’s when I found Kidney Research UK. I found lots of useful information about treatments and tips on how you can keep your kidneys healthy, so I made a lot of changes to my lifestyle.

“I was a big smoker so I gave that up straight away, and then I changed my diet. I reduced the amount of takeaways I was eating, I introduced a lot of fruit and vegetables, drank a lot more water and cut down on all the sugary drinks. I really wanted to make sure I was doing everything I could to help myself.”

After educating himself about his condition and coming to terms with his new way of life, he was determined to try and find a way to help other people in the same situation.

In 2020, in the height of the first Covid-19 lockdown, he started a TikTok account and began posting videos with tips for those living with kidney disease.

What happened next came as quite a shock…

“After my diagnosis I had lots of questions from people at work so I just decided to make those into videos on TikTok, I thought I’d share some simple tips for other people in the same boat as me.

“I started getting loads of messages from people saying they’d been diagnosed after watching my videos, which was amazing, and it just snow-balled. In April last year I had my first video that reached a million views and I couldn’t believe it. When I first started my channel I had absolutely no idea it would blow up like it has and it made me realise just how big kidney disease is.

“I had a video hit five million views and that’s when it just got crazy really. The community really started to build from that point and I was receiving so many messages from people, and I still get messages every day now. So far the videos have had over 55m views – it’s insane.”

Darren is determined to use his platform to raise awareness of kidney disease but to also give other patients a place to go when they feel as he did upon diagnosis. He has helped us with some of our own content since we launched Kidney Research UK’s TikTok and he also works with other charities, something he is incredibly passionate about.

“I’m Welsh so I’m an ambassador for Kidney Wales and I have obviously helped Kidney Research UK a lot too. M, and my partner, Lucinda, and I have plans to go out on the road next year and try to reach even more people and just educate them a bit more about kidney disease. I just want to help as many people as I can.”

No plans to stop

As for the future, Darren has big plans. Although other health issues have forced him to give up work, he intends to use his time to keep raising awareness.

“Although I have a few other health issues my kidney health is quite good at the moment, in fact last week was the first time since I was diagnosed that my urine was totally free of protein, and I must admit I celebrated with a takeaway!

“My health is monitored by my renal team now, I see my doctor every six months. Previously, it was every two weeks but things are looking good so they aren’t as regular now and I’m hopeful that after my next check-up it will just be once a year.

“I know it sounds like a big ambition, but I want to be the face of kidney disease. When people get diagnosed and they don’t know where to turn, I want them to think of me and know that they can get some help and support.

Darren and Lucina in their TTKWarrior t-shirts

“I want to keep growing the community we’ve built, keep raising awareness and keep helping people. Rather than feeling scared or confused when they’re diagnosed, I want people to know exactly what to do and where to go to get the help they need. I don’t have all the answers but I can point people in the right direction, whether that’s to their renal team, to a charity or just by sharing some of the things I’ve done that have helped me.”

You can see Darren’s videos and follow him on TikTok by searching for ‘ttkwarrior’.

Worried about your kidneys?