Cycling in memory of my best friend

Kerry Brindle still can’t talk about the death of her best friend Niki Power without crying. It’s been five years since the mum of two passed away, her body devastated by hereditary polycystic kidney disease.

“I’d known Niki since I was 17. I met her at college,” she says. “We all piled onto the bus and on the first day this girl asked if she could sit down next to me. I said, ‘Yeah but don’t expect me to talk to you because I’m not in the mood.’

“The next day she did the same thing, and I laughed. And that was it. We were best friends. We went through college together, she was there for me when I lost my dad, I was at her wedding, she was at mine, I’m godmother to her two boys.”

The two friends, who both lived in Ringwood in the New Forest, loved to go clubbing together in nearby Bournemouth. “Our anthem was Dreamer by Livin’ Joy. If Niki had lost me in the club, when that song came on she always knew to look for the nearest pole, as she knew I’d be wrapped around it, dancing! We were always laughing, we loved being young.”

Bad news on the way

But there was a cloud on the horizon. Niki’s mum realised that her daughter had inherited the condition from the paternal side of the family when she began passing kidney stones at a young age.

Kerry says, “From the age of 16 it became more apparent. Although we had fun nights out, she did need to be careful. She got married in her early 20s and medics warned her not to have children, because of the potential build up of calcium deposits and pressure on the kidneys.

“But she was determined and went on to have two lovely children, Elliot and Owen and when she was in her early 30s, she had a transplant.”

However, the donor kidney only lasted a couple of years, and soon Niki was on dialysis. At that point, Kerry says, the condition’s debilitating effect on her body meant the chance of finding another donor match was much less likely.

“In the last few years of her life, her bones started to crumble and the calcium started to build up. The mitral valve in her heart was under pressure. She said to me on many occasions, ‘I’ll be in a wheelchair by the age of 40 and dead by the age of 50’ and she was right on both those counts.”

Those last few weeks were “awful”, but Kerry says Niki never lost her spirit and ability to make others laugh. “I went to see her and she asked me why I wasn’t laughing and joking like normal. It was typical of her to put on a front, and she was telling all the nurses stories about our clubbing days.

“Just before she died she texted me to tell me what a great best friend I’d been and how lucky she was to have met me.”

Doing it for Nicky 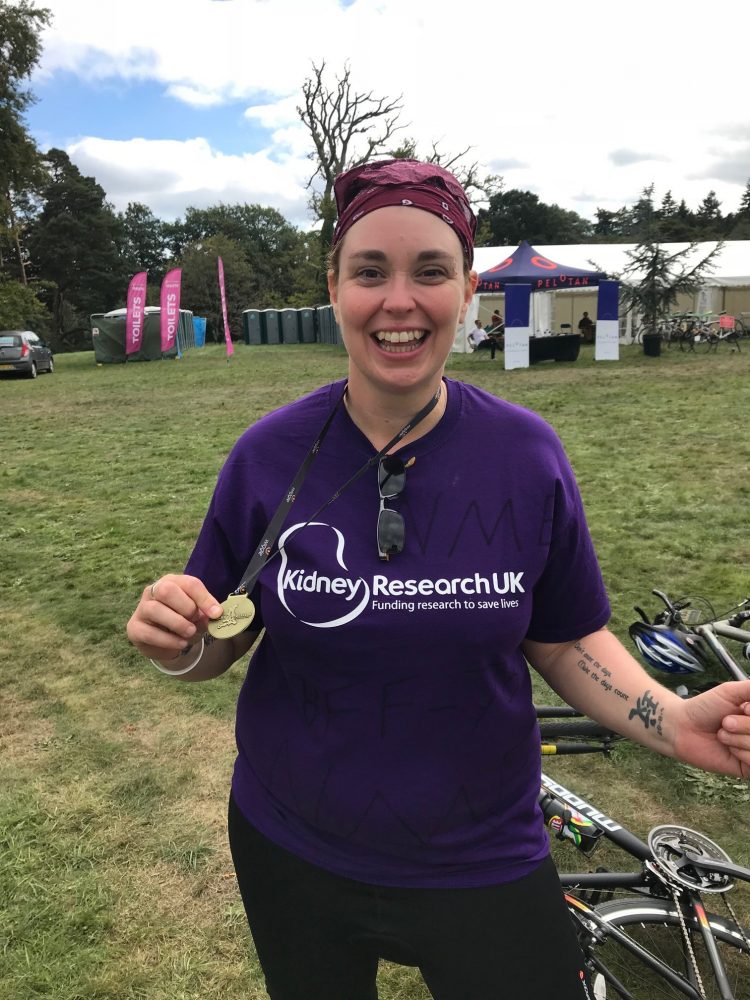 Kerry after one of her cycle challenges

Kerry was devastated by her friend’s death, and leaned on her wife Rosemary for support. The funeral was tough but she was determined to help carry the coffin in and deliver a eulogy. Her ashes were scattered a donkey sanctuary, and a plaque erected in her memory. Sadly, Niki’s dad also passed away in 2020.

Now, Kerry’s determined to be a second mum for the boys, aged 19 and 21. “Niki would be so proud of them and the beautiful men they’ve grown into,” she says. “I’m lucky and privileged to have them in my life, but it’s at a cost of her not being here.”

Since Niki’s death, Kerry has channelled the anger she felt at losing her friend so young into raising awareness for Kidney Research UK.

“In 2018, we did a cycle race around the New Forest. You have a choice between 30, 60 or 100 miles. My godsons’ dad did 60 and we did 30. I was with my youngest godson all the way. It was stunning, with the forest and the ponies, but it was bittersweet because of the reason we were doing it.

“I’ve never done anything like that before, and when I crossed the line, I broke down. I raised £540, and the kids have carried on doing challenges since then, I’ve signed up for the 850 Cycle Challenge. I’ll be cycling 850km over 85 days, to represent the 850 million people with kidney disease all over the world. I love cycling around the local area – I now live in Devon – and it makes me feel happy and healthy. Being outside always makes things feel better.

“I’m doing it to raise money for Kidney Research UK and hopefully awareness too, and am aiming to do nine miles each day between July and September.”

Kerry is determined that more people understand the reality of what life is like for those living with polycystic kidney disease and other kidney conditions – particularly when it comes to the burden placed on family members, and access to benefits for patients.

“When Owen was younger, he used to be Niki’s carer and he inserted her dialysis line for her and set up the dialysis machine when she was dialysing at home,” she says. “It was hard for Elliot because he’s inherited the condition and so he struggled with the thought that it might be him one day.

“Niki tried to get benefits but they said she could still go to work, and she continued in her job in HR until the final few weeks of her life. It was a struggle for her. But she did the best she could.

“As I said in my eulogy, she was the bravest person I’ve ever met.”

Take part in a sponsored event or run your own fundraiser. However you want to do it, we're here to support you every step of the way.