Giving back through volunteering

After Kailash Malhotra retired from the nursing profession, she was determined to carry on giving back to society. The 70-year-old, who lives in Glasgow, decided to turn to volunteering, using her exceptional language skills to go out into the community and educate people about organ donation. For Volunteers Week, she is spreading the word about what a vital role volunteering plays in encouraging people to become living donors or to stay on the Organ Register.

Kailash was motivated to become a volunteer due to the loss of her son who died of leukaemia when he was aged just three, in 1989. Medics were unable to find a bone marrow donor.

Kailash says, “It was 14 months of hell. It’s still such a painful subject for me. But having lost someone so young, it taught me that the greatest thing we can do is to save somebody’s life. When you donate an organ, you are giving happiness not only to the recipient, but to the family as well.”

The mum, who also has three daughters, speaks Punjabi, Hindi, Urdu and Swahili as well as English. She chose to volunteer for Kidney Research UK in 2014, because she recognised the greater risk of kidney disease in ethnic minorities. It is up to five times more common, and there is a longer wait for black and Asian patients for a donor kidney, as the best match will come from someone of the same ethnicity.

“But I’ll also try to get across the joy and satisfaction involved in becoming a living donor – it’s difficult to explain sometimes how nice it feels to have saved somebody’s life. It’s a feeling of satisfaction inside you. And for those who donate organs after death, I explain what an incredible thought it is that you could save someone after you’ve died. We are caretakers of our bodies, not keepers.”

Being a peer educator for Kidney Research UK is not the limit of Kailash’s volunteering efforts, however. She also cooks lunch on Fridays for members of the medical community, taking meals to pharmacies and doctors’ surgeries. Plus, she’s very handy with a sewing machine.

“I’ve made over 2,000 scrub bags for medics so they can take their uniforms home to wash hygienically. I deliver food to the elderly and have also been making crocheted stuffed love heart decorations for Covid patients – I taught myself to do it the hard way, by watching tutorials on YouTube. Everyone told me it was easy but no one was happy to teach me!” 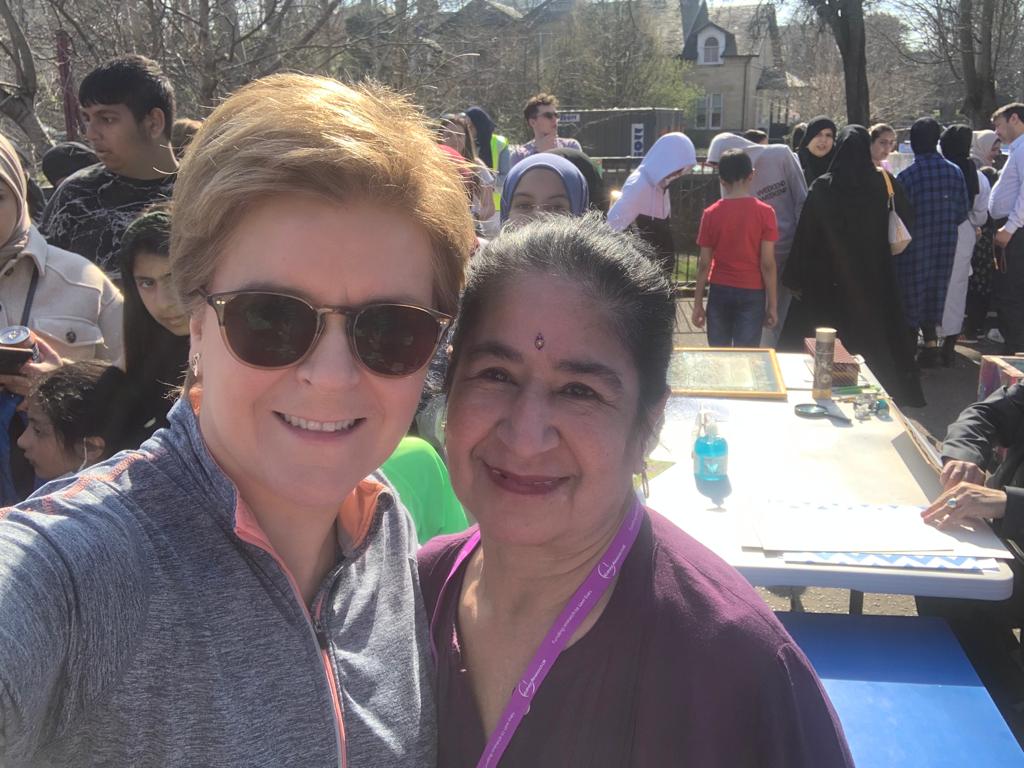 How does it make Kailash feel when she’s out and about volunteering and donating things she’s made? “Down deep in my heart I feel so satisfied,” she says. “I remember my mother saying to me when we were children, it’s easy to feed your own child and get them dressed. Trying to help somebody’s else’s child who we don’t know is the least we can do.”

Volunteers Week is vital not only for thanking tireless members of the community like Kailash, but also for raising awareness about these rewarding roles. Kailash recently met First Minister of Scotland Nicola Sturgeon when she was volunteering on a stall for Kidney Research UK at an event in a primary school.

Kailash says, “The pandemic has changed things a lot, and so it’s good to try to help in any way we can. Nicola said to me, ‘Keep up the good work’.  It’s about the satisfaction of your heart, it’s doing something useful for mankind.’”

Giving back through volunteering