For the past two years, Sarah Gwalchmai has been shielding at home in Guilsfield, Wales. Finding it isolating, transplant recipient Sarah, who used to work in a garden centre, has turned to volunteering for Kidney Research UK – a role she says she finds incredibly rewarding. Now, to mark Volunteers Week, she’s telling her story in order to encourage others to step up and become volunteers themselves.

The 34-year-old received a kidney from her husband Gwyn in 2017 after her first donated kidney started to fail, and like many transplant patients on immunosuppressant drugs, the Covid-19 vaccine has had limited success.

She says, “I took part in the Melody study at Imperial College and my antibody tests show I didn’t pick up any antibodies from the vaccine. So I’m still being very, very cautious, as are many transplant patients. But since volunteering with Kidney Research UK, I’ve made a lot of friends who are all in the same boat.”

Sarah was born with congenital nephrotic syndrome. The condition was picked up when she was nine weeks old, and she had dialysis for two years prior to having her first kidney transplant in 1994.

She met husband Gwyn, a lorry driver, in the noughties, but shortly afterwards her kidney function started to decline.

She says, “When we met, I was doing really well. But then things deteriorated. Unfortunately, I caught pneumonia in 2006 around Christmas and it caused my function to drop over a period of time. I kept working all the time as I’m quite independent and determined, until my kidney function dropped to six per cent.

“My parents and Gwyn were tested in the summer of 2015. Dad was a match but they discovered he wasn’t well enough to donate, and then Gwyn was found to be suitable too. Everything had been put in place for me to start dialysis, but then it all fell into place and the operation could go ahead. It’s been wonderful, a new lease of life.”

The day after the transplant, Sarah says she could see how the colour in her face had changed, and the exhaustion and sickness that had dogged her for years vanished.

She adds, “It took Gwyn a few more days to recover. But within a couple of weeks he was back to how he was before. It’s definitely brought us closer together – we share a kidney now! We’re a good team.”

However, during the pandemic, Sarah began to feel isolated at home. Looking for something to occupy her time, she first started making cards, and then got a playful collie puppy called Peggy. Then last summer, she discovered volunteering.

“I was trying to keep as busy as possible. I’d been using the Kidney Research UK website to keep up to date with the latest advice and I saw some volunteering opportunities. I started off reading some of the lay summaries of research projects looking for funding. Then it was suggested I take on an ambassador role here in Wales.

“At the moment it’s virtual, but once I feel safe and things have improved, I’d like to go out and do some talks at local events and at schools and community groups. I’m also doing an online course to help with my volunteering role, and soon will be given online training on giving talks.

“The best thing I’ve done so far is putting together a primary school resources pack that was piloted for World Kidney Day, and now I’m working on a project for the charity’s new TikTok channel. I’m helping think of ideas for that to raise awareness among younger people about the vital work Kidney Research UK do.”

Now, in Volunteers Week, Sarah is helping the volunteer programme managers at Kidney Research UK, Jo Henderson and Beccy Boyle, attract new ambassadors for the charity, and is spreading the word about what it means to be a volunteer.

She says, “Jo and Beccy have been so welcoming and supportive. It’s just really nice to be part of a team, and the rest of the ambassadors are just wonderful. We have meetings once a week and we can discuss what we’ve all done individually on the volunteering side as well as talk about our own health issues. It’s very rewarding and has been a real pleasure.

“I got involved to keep my mind occupied while I was shielding but I’ve also picked up a lot of transferable skills that go into the workplace. I wasn’t very tech savvy before and it’s definitely built my confidence with things like Teams and Zoom. I’ve always been a people person, and I love the social interaction I get from volunteering.

“Most of all though, I am passionate about spreading the word of Kidney Research UK as I fully appreciate all the hard work that they do.” 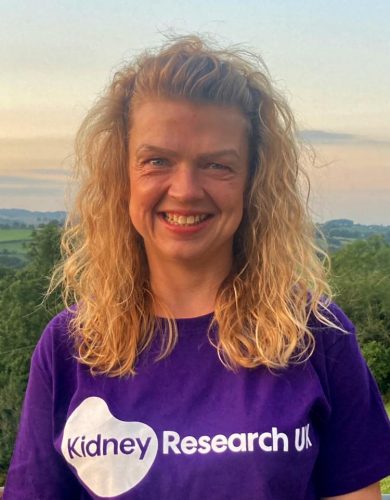 Sarah in her charity tshirt

Our volunteers are vital to helping spread the word

Find out about the ways you can get involved