A father of three facing kidney failure has set himself the mammoth task of cycling 20,220 minutes this year in order to raise money for Kidney Research UK.

Peter Garrod, 34, from County Durham, works in community development. He has a kidney condition, but was inspired to take up the challenge after discovering his kidney function was declining. He’s being supported by the local community, wife Sarah, 35, and his daughters Hattie, seven, Heidi, five, and Sadie, three.

Peter says, “When I was born, some of my internal organs were on the outside of my body, a condition called omphalocele. I had to have operations to sort that out, and take certain medications which scarred my kidneys. I also had vesicoureteral reflux (where urine was travelling the wrong way, from my bladder to my kidneys), which resulted in further scarring to both. But I managed to maintain about 60 per cent function for most of my life.

“I’ve always led a very normal, active life as that level was fine for my kidneys to do their job. But recently I have started to have problems. My blood pressure went up and I developed gout, which was incredibly painful, in my joints. My kidney function at my last test was at 29 per cent.”

What the future holds

Peter was referred to a consultant, who reassured him that they would not start to look at any form of renal replacement therapy, including dialysis, until function drops below 20 per cent.

Peter says, “However, more recently, I saw another doctor whose approach was blunter. He told me the reality was I’d need a kidney transplant in the future – it could be two years, or it could be 10 years.

“That was hard for me to hear because it wasn’t a question of focusing on changes I could make with my own lifestyle. I’ve always been fairly fit anyway, and I don’t drink heavily, but I do try to live as healthily as possible. It hit me hard mentally, and Dr Google didn’t help. I kept working out in my head how old my kids would be when I had to have a transplant and worse all the things I might miss out on should anything go wrong.

“I felt like that until I confided in my wife. She said to me, ‘Worrying won’t change anything, and it’s not going to create a positive impact.’” 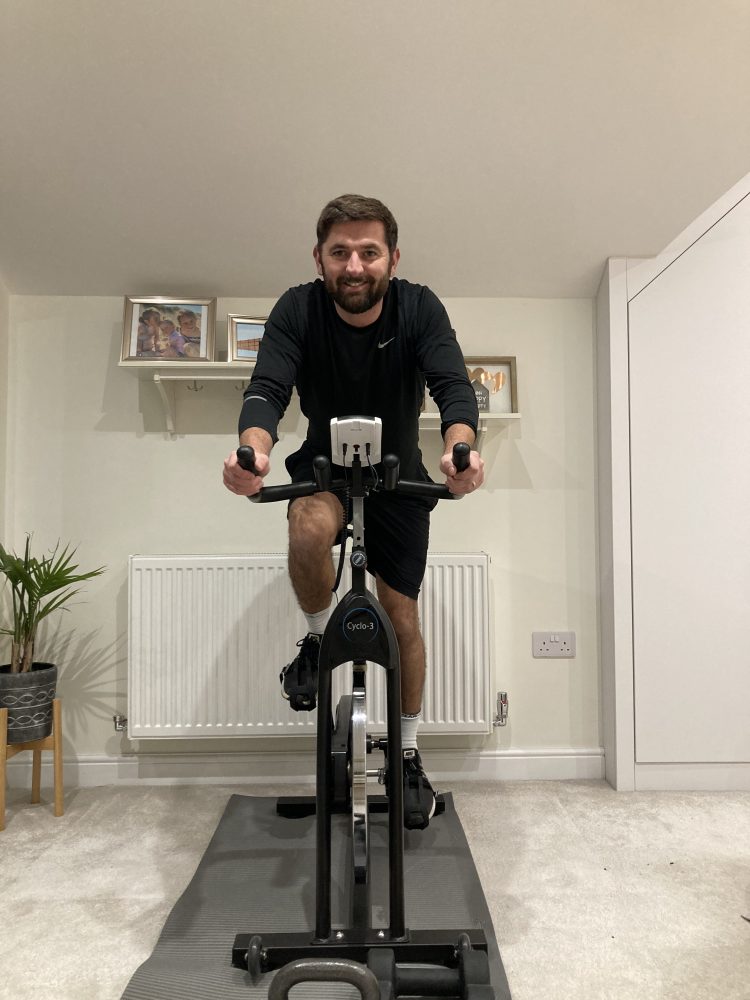 The chat inspired Peter to start thinking more positively again. He discovered Kidney Research UK and started reading about how the charity supported people not just medically, but with mental health as well.

“I felt some of the stories they’d put out were really positive and so decided to support them. Back in July last year I’d bought myself a spin bike to keep fit. I’d had a couple of gout flare ups, and I’ve been advised to stay away from Ibuprofen. The bike’s easier on my joints than running or going to the gym.

“Then in October, I started to think I might as well do a bit of a challenge on it as well as keeping fit – something that would create a positive impact, and raise money and awareness for Kidney Research UK.”

“We lead a busy life – we’re up at 6am to walk the dog and get the kids ready and we both have a busy work life, so sometimes it won’t be until 9pm that I get a chance to do it. Sometimes it’s hard to fit in,” he says.

But when he’s struggling to find the motivation to get on his bike, Peter thinks about the people he’s met and the stories he’s heard about of others impacted by kidney disease and that gives him the impetus he needs to notch up his daily minutes.

He says: “The number of local people who have contacted me who are impacted by kidney disease is overwhelming. Hearing their stories is all the motivation I need to stop scrolling on my phone and jump on the bike. I know the reality of my condition, but I continue to live a normal life and I have had it easy so far compared to others. At first, I set off doing it to raise money for Kidney Research UK because of my condition but now it feels like it is about more than that. It is about supporting those who have supported me. It is about raising as much awareness as possible for the amazing work the charity does to support others.

So far, Peter has raised over £1,000 via his bike challenge, plus he’s raised another £1,800 by organising a community car wash, keep fit coffee morning, fire walks and a raffle, with the support of people in his village.

He says: “The money we’ve raised is brilliant, but it’s about more than that. It’s the awareness and opportunity for people to share stories, too. That’s something that will live beyond the challenge, and which will stay with me once the challenge is over.”

Donate to Peter’s cause: https://www.justgiving.com/fundraising/peter-garrod1

Genetic link to common cause of kidney disease in children identified

Improving quality of life in CKD: what can we learn from patient experiences?

Our second MedTech competition launches with a focus on dialysis