Wherever possible, Jason Mageehan has always tried to turn adversity into opportunity – whether arranging client meetings to coincide with dialysis sessions or viewing his kidney transplant operation as a springboard to achieving personal and business goals.

Now, therapy to deal with the trauma of his recent fight for life against Covid-19 has helped Jason identify a new purpose in his life – supporting other people with kidney disease.

Jason has become a volunteer community ambassador for Kidney Research UK in Essex and he can’t wait to use his many business skills to ‘give something back’ for the care he has received.

Jason Mageehan with wife Eleth and daughter Blayke at the launch of their new business.

When Jason started having migraines in his late 20’s the last thing he suspected was kidney failure. Doctors discovered that his  kidney function had reduced to just 14 percent and he was diagnosed with IGA nephropathy, a condition which causes a protein called immunoglobulin A (IgA) to become trapped in the fine filters of the kidney, causing damage and scarring to the whole kidney. Jason spent more than three years on dialysis before receiving a kidney from his mother in 2007.

“I’d just gone full-time self-employed when I started my haemodialysis at the Colchester Renal Unit and I needed to keep on working,” says Jason, who lives in Manningtree with his wife Eleth and daughter Blayke.

Although many people are unable to work while on dialysis Jason found a way to combine the two.

“When the unit told me that the only bed available for my chosen dialysis sessions would be in an isolation room, I didn’t mind being in a room on my own. I invited clients to join me for meetings in the room, and I always timed them to ensure I didn’t miss the tea and biscuits!” says Jason.

“Life on dialysis was tough and I knew that a transplant came with certain risks but everything changed after my transplant operation. It felt like I’d been running on bad fuel for a long time and then all of a sudden, my mind was crystal clear. I was able to do all the things I wanted to do and more to make a nice life for my family – and then I caught Covid-19.” 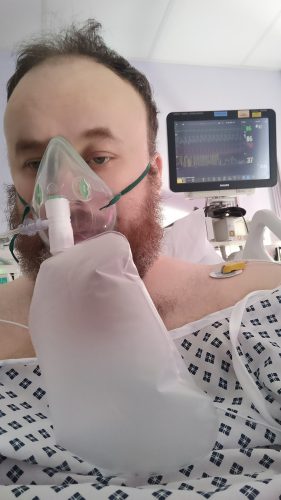 Fighting for life against Covid-19

Jason only expected to stay overnight at Colchester Hospital while tests were done to find out whether he had the virus, but he ended up spending almost a month in intensive care, fighting for his life.

“The doctors told me they wanted to put me in an induced coma for a few days to keep me safe. They thought this was going to be the best chance for me and my kidney to make it out unscathed. So I agreed, phoned my wife and my mum and then they sedated me and put me on a ventilator.

“They tried to wake me up after two weeks, but it felt like I was breathing through a drinking straw, I was struggling, fighting for life; it was terrible. I can remember a nurse speaking into my ear, telling me they were going to have to put me back in a coma but, in order for me to breathe, they were going to have to perform a tracheostomy (insert a tube through my neck in my windpipe), which would mean that when I eventually came round, I wouldn’t be able to talk.

Four or five days later I came round. I was breathing easier but I couldn’t speak at first and my right arm had stopped working completely, I also had a huge amount of delirium. I thought all sorts of things had happened but nobody was able to dispel these myths for several days because I wasn’t able to communicate.

Jason eventually came home in May 2020 after spending almost two months in hospital. He underwent intensive physiotherapy to rebuild his weakened muscles and further treatment has successfully repaired nerve damage in his arm. Jason is also receiving therapy after being diagnosed with post-traumatic stress disorder (PTSD) as a result of his ordeal.

“Anyone who has been in intensive care will know that delirium, caused by all the drugs that are needed to keep you alive, can really damage you mentally. My life was saved by exceptional care, but I was left in a very bad mental state,” says Jason.

“As part of my therapy, I identified a need to do something that would give something back; to make full use of the skills I have gained through running my three businesses to help others. So when I saw the role of community ambassador for Kidney Research UK it seemed like the perfect fit.

“I really enjoy public speaking and networking, and I want to share my marketing, advertising and event management expertise. I want the charity to utilise me as a resource so together we can ultimately raise the  profile of kidney disease to help people find out more about it, do more to avoid it and raise money for more research into it.”

If you've been inspired by Jason, visit our volunteer webpage to find out more on how you can get involved.