A 32-year-old man born with four kidneys has embarked on a personal challenge to walk from Land’s End to John O’Groats to raise money for Kidney Research UK.

Inspired by the late Sir Captain Tom, who raised £32.5 million for the NHS during the Covid-19 pandemic, Tom Goodwin, 32, is setting out on a unique personal challenge to raise awareness at a time when all charities are under fundraising pressure.

Tom’s fundraising target is £10,000, and he also aims to tell the stories of other kidney patients as he walks the length of the UK adopting the moniker “Kidney Tom” as a tribute to the remarkable efforts of his fundraising hero.

When he was nine months old, Tom received life changing treatment at Plymouth Derriford Hospital and Bristol Sick Children’s Hospital, where his unique condition was spotted and successfully treated by an NHS renal specialist.

“It was very distressing time for my parents” says Tom who was admitted to hospital suffering febrile convulsions. “After struggling for an initial diagnosis, a CT scan revealed that I was born with bilateral duplex kidneys – an extremely rare condition affecting fewer than 1 in 10,000 people.

“I was born with four kidneys rather than the usual two, and one of them on my left side was not fully formed, and causing the problem.”

Tom’s rogue kidney was removed, and he was left with three functioning kidneys, which he has to this day. His parents were advised that Tom could be prone to UTIs and he had to take daily antibiotics as a child, which his parents dubbed “magic medicine”.

Tom says, “One of my earliest memories is listening to a Fisher Price jukebox, which used to hang on my hospital cot, playing ‘Somewhere Over the Rainbow’ by Eva Cassidy.

“It was a very stressful period for my parents, who also had my two-year-old sister to look after, but thanks to the expert care provided by the NHS, I was successfully treated and have suffered no problems since.

“When I was a child, I wasn’t fully aware I was different in that way, but later on I thought it was quite cool. Telling people, ‘I was born with four kidneys’ was a good icebreaker at teenage parties and university.”

After the pandemic decimated the amount of money charities like Kidney Research UK were receiving from the public, Tom decided to create his own fundraising challenge.

Having walked 500 miles along the Camino de Santiago in July 2020, he was naturally drawn to a challenge that involved walking.

“You very quickly sink into a rhythm, and after a week you get used to it. You wake up on schedule, at sunrise and walk for about five hours,” he says. 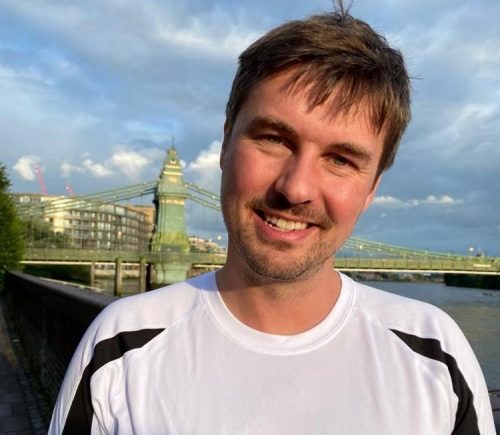 Tom’s route from Cornwall to Scotland will take in areas which he has a personal connection to, such as Plymouth, but his aim is to also try to tell the stories of the people he meets along the way.

He will set off on his 1,000-mile journey on August 21 – one day after his 33rd birthday – with everything he needs for the trip in his backpack.

“My route takes in about 50 different stops, and I’ll aim to arrive at 2.30 or 3.00pm in the afternoon so I can meet the local community each day. I plan to meet renal consultants, people who have had kidney transplants and those people with kidney disease who have been shielding and will try to tell their stories at the same time.

“I owe a huge debt of gratitude to the fantastic NHS team who provided my treatment” says Tom. “Today, my bilateral duplex kidneys would be identified during pregnancy due to advances in healthcare technology. Such recent improvements in renal care are only made possible thanks to funding via charities like Kidney Research UK.

“As a result of the pandemic, the charity has lost 50% of its funding. I’m determined to fundraise as much as possible for them and for the people like me at nine months old, who rely upon the expertise of NHS medical professionals.

“No one really thinks about their kidneys until something goes wrong, but they are remarkable organs that keep us alive, filtering 200 litres of blood each day.

Tom adds, “Worldwide, around one in nine people have chronic kidney disease, for which there is no cure. Here in the UK, 20 people develop kidney failure each day. Nearly 30,000 people need dialysis to survive and five people every week die while on the waiting list for a kidney.

“That’s unacceptable in 2021 and, as someone who has directly benefited from kidney research since 1989, I’m determined to raise awareness of the problem and to do what I can to ensure help reaches those in need.”

To support Tom in his challenge and donate to Kidney Research UK, visit his Just Giving fundraising page. If you've been inspired by Tom, find out how you can take on your on challenge.

Get inspired by our fundraisers...

Positive steps in memory at the London Bridges Walk

Stars and supporters create fundraising magic at the gala dinner

Why I want to make this film for my dad