Edinburgh man is forever grateful that his mum saved his life

An Edinburgh man is grateful that his mum gave him the gift of life by donating a kidney to him just a year before she died.

Neil Scully wishes his mum Moyra was still alive to enjoy watching his transformation after she donated a kidney when he became seriously ill without warning.

Neil Scully and his mum Moyra just after the transplant

Sadly, Moyra died just a year after giving Neil his new lease of life, but he will never stop being grateful for her lasting precious gift.

Neil was diagnosed with amyloidosis, a rare disease where proteins build up on organs like the kidney, eventually damaging them.

It is so rare that only one hospital in the UK – the Royal Free in London – specialises in the condition, which means patients like Neil must make an annual trip for essential checks.

“Mum’s kidney gave me a new lease of life,” he said. “Sadly, she died a year later, and I’m forever grateful for her for giving me my normality back. I wish I’d had more time for her to see how amazing that gift was.”

Assumed his exhaustion was an arthritis flare up

“Around that time, I’d been tired but put it down to an arthritis flare up, so it was a massive shock when I was told I’d need dialysis and eventually a transplant.”

The journey with kidney disease began for Neil in 2017 when a routine test showed his kidney function was lower than expected.

He went from discussing dialysis at some point in the future to his kidneys completely failing within the space of two months.

“Tests showed my kidney function was at 45 per cent, which led to a biopsy, but by the time those results were back, my function was just fifteen per cent and was dropping rapidly. I was suddenly really ill. It was a lot to get my head round.

“At the age of 38 life went on hold. A holiday with my wife to Corfu was immediately cancelled as I was told I couldn’t go abroad. After a few days off work, which ended up being six months, I realised I had to stop worrying and adjust to this new life.” 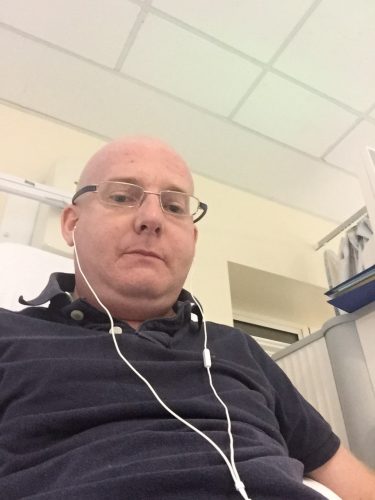 After three failed attempts to insert a catheter for night-time peritoneal dialysis, Neil went on twilight haemodialysis at his local renal unit for around a year.

“Getting home at midnight, then up early for work was exhausting, but my employer was fantastic in every way supporting me.”

However, he wasn’t sleeping well at night due to cramps and Neil looks back and wondered how he got through.

“Dialysis is really tough and there’s no choice. Do or die. I don’t know how people have dialysis long term.”

Neil couldn’t get a transplant until his amyloidosis inflammatory markers went down so was given a powerful drug tocilizumab to reduce the levels.

Meantime, members of his family offered to donate a kidney and his mum Moyra went forward as the best match. Transplant surgery went ahead in November 2018 and was a resounding success.

“I felt brilliant, like a completely new person. I hadn’t realised how sick I’d become. The reality was I was I’d only been scraping by.”

Neil has since raised funds for Kidney Research UK by taking part in the #850Challenge which was supported by his employers, Lloyds Banking Group, who match funded his charity donation.

“My research dream is finding an alternative treatment to dialysis. For me, it was tough, but you have to keep going. If there’s a way of making that easier for people that would be amazing.”