A musical theatre actress is telling her story to raise awareness of an urgent need for research to improve treatments for kidney disease.

Jasmine Shen, who played Catherine of Aragon in the musical Six, is supporting our Transforming Treatments campaign after living with a rare form of kidney disease for five years.

“I'm taking a new medication which made me realise how important research is, to develop new drugs with fewer side effects so people have a better quality of life and longer remission.”

Kidney disease struck out of the blue for Jasmine when she had no choice but to sit A levels in her pyjamas and slippers when her kidneys were damaged, and she gained just over two stone in a fortnight.

She had no idea why she ballooned almost overnight leaving her with no clothes that fit.

I refused to give in

With kidney disease in the background quietly making her sick and toxins building up inside her body, Jasmine sat her exams in her nightwear with her legs raised on a stool to prevent the swelling worsening.

“I refused to give in, so pushed myself and got a distinction star and two Bs in my A levels,” the 23-year-old said. “Looking back, I’ve no idea how I did it.”

Jasmine is telling her story to raise awareness of how kidney disease can affect anyone and strike out of the blue with no warning.

“Most importantly, I want to say don’t let chronic illness define you or take away from achieving your goals in life, that’s the most important value I believe in,” she said.

Five years on, Jasmine takes a combination of immunosuppressant drugs and corticosteroids to keep her system from flaring up after receiving a diagnosis of a rare autoimmune condition.

“When I was 18, I was going through a stressful time. Not getting much sleep, revising for A Levels, always training at dance classes. “I thought performing for a career was out of my league, so wanted good A Levels for a degree, to be a primary school teacher.”

But as she worked towards exam success Jasmine became run down. She assumed it was study pressure and after a particularly stressful day “had a good cry.” “

My face became puffy and swollen, I thought from tears, but after a few days I got worried. My face was still swollen. I kept falling asleep at my desk in class, I felt sick and was rapidly gaining weight.” 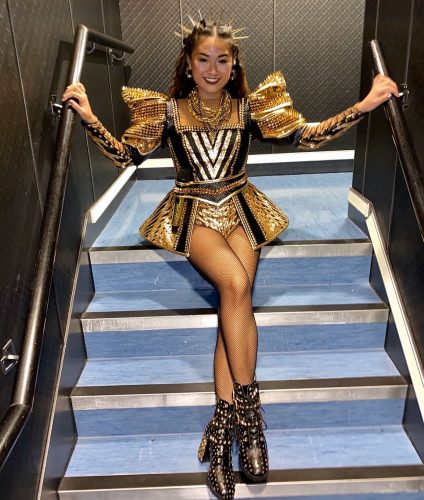 As a dancer Jasmine’s weight and energy levels remained constant thanks to a rigorous training programme, so this was unusual.

“I’m allergic to all sorts, cat hair, hayfever, penicillin, so wondered if it was another allergy, but mum’s instinct was this was really wrong.”

Jasmine booked in at the GP who took one look and told her to go to hospital immediately.

“Life became a scary unknown place. I couldn’t walk far and it was hard to breathe due to swelling. I struggled to go to the toilet and wee. I felt heavy and lethargic, none of it made sense.”

Jasmine was in hospital for five days and after having a kidney biopsy was given the diagnosis of minimal change disease nephrotic syndrome.

Steroid medication helped Jasmine return to a new normal and that summer she earned a place at one of the UK’s top dance and musical theatre conservatoires, in London, but she worried her kidney problems might prove too much.

From bubbly and outgoing to feeling isolated

When she moved to London, she felt like she’d lost her usual bubbly, outgoing self, and felt quite isolated.

“Steroid side effects included my hair falling out and terrible bouts of insomnia which is never good when you have dance class first thing at 8.30am.

“I lost muscle tone and felt stressed. In that first year at dance and musical theatre training I nearly dropped out three times due to relapses. It was the toughest time of my life.

“I kept going but feel I didn’t make many new friends as I was determined to do anything I could to get into remission during vocational training which meant missing out on a lot of freshers events and socialising.”

Nobody saw her kidney disease or her struggles behind the scenes. Jasmine tried three times to come off steroids but each time she reached below a 10mg dose, she relapsed as symptoms of swelling and tiredness returned.

After relapsing three times, she made the decision to try an additional second line immunosuppressant drug, called cyclosporin, which would enable her to slowly reduce steroid use.

Over time Jasmine hoped to only have to take cyclosporin and eventually reduce that medication dosage over the years too. "It felt like a miracle.”

By the third year Jasmine wrote a dissertation close to her heart looking at the chronically ill and coping strategies within vocational dance training.

Meantime, she was hungry for information about her health condition and other people’s experiences, but all she could find were science channels on YouTube and various scientific papers.

Inspired, she set up a YouTube channel called Jasmine’s Journey, joined a Facebook support group and started posting about her experience with nephrotic syndrome, life on steroids and the mental health impact of kidney disease.

She also posts videos of her daily life, showing people you don’t need to let an illness define you.

Celebrations followed shortly after when she got a part in Six the Musical on a Norwegian cruise liner, performing from the end of 2019 to March 2020 when Covid hit and performers returned home. 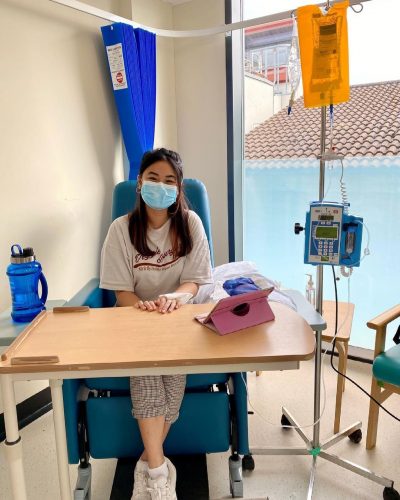 The pandemic has given Jasmine time to reflect and help others living with kidney disease to have a more positive outlook on life, as she tries to completely come off steroids.

It was during this time that her channel was spotted by the Nephrotic Syndrome Foundation in California, a non-profit organisation, who invited her to become a peer team lead.

“It’s been great to help children and adults and support parents too. For example, helping them understand why toddlers suffer anger from steroid side effects.

“It’s helping me come to terms with my own struggles and makes me feel less isolated living life with kidney disease.”

She has recently been given Rituximab to treat a relapse that occurred at the end of October 2020, an immunotherapy for difficult to treat nephrotic syndrome. And only time will tell if this drug has been successful in giving her a long remission.

She has started taking cyclosporin again and hopes to come off steroids again too. “The day after Rituximab felt like a new lease of life,” Jasmine said.

Staying positive no matter what life throws my way!

“It made me realise how important research is, to develop new drugs with fewer side effects so people have a better quality of life and longer remission.”

In spite of everything she has been through Jasmine is one determined individual.

“I never let a chronic illness define my dreams and goals. Still got to aim high. Still working hard too and staying as fit as I can to keep on top of my game.

“My goals are to keep bagging great jobs whether that be in musical theatre, film or TV. And to also stay happy and positive no matter what life throws my way – be that health-related or life related.”