I feel like a cat with nine lives. James celebrates his 47th kidneyversary

James Stevenson feels lucky to be alive after doctors diagnosed him with failing kidneys in the 1950s and his parents were told their young son would only live for another two years. 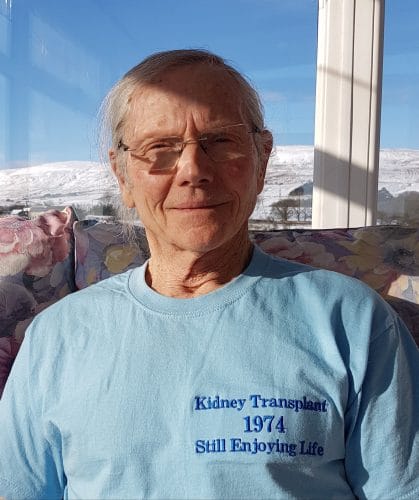 Now 75, James has enjoyed a blessed life and puts it down to his mum finding a pioneering naturopath who steered him to a healthy diet and lifestyle.

James believes the foundations of organic food helped keep his kidneys healthy for 14 years before having a successful transplant in 1974.

“In August it is my 47th kidneyversary, but really, every day is a celebration,” James said. “Every day I wake up and thank God I’m alive.

Feeling lucky to still be here

“I’m very lucky, like a cat with nine lives. My kidney disease diagnosis came at a time when there were no treatment options. My transplant surgery was in the early days of no anti-rejection drugs or immunosuppressants, yet I’m still here.

“My poor parents were told there was nothing they could do for me in the 1950s, now look. Still going strong!”

James’ mum Mary was a nurse and instead of accepting his fate she found a homeopath called Mrs Buchannan where the family lived at the time in Lusaka, Zambia, who gave naturopathic remedies and completely changed his diet to keep his kidneys functioning.

At that time, he was having weekly injections of a drug called Merysal, which shocks kidneys into releasing urine to release toxins, but the healthy eating regime meant those could be dropped.

James remained reasonably well before a successful kidney transplant from his twin brother Archie when he was 29 years old.

“In those days the food changes and homeopathic pills were considered a bit far out, now, people understand the importance of a healthy diet and natural remedies.

James Stevenson with his brother and dad

“Today, I have a little small-holding and still grow my own vegetables. I never have cows’ milk and usually have oat milk. I kept my own goat at one point.”

James’ dad was in the Colonial Civil Service and the family were living in Rhodesia when James was first diagnosed.

The family returned to their hometown of Glasgow so James could have tests where a biopsy revealed nephritis. James was in hospital for three months.

“There were no dialysis machines at that time and the first kidney transplant was yet to be performed - at Edinburgh in 1960 - it was a difficult time for the family.”

The family returned to Africa once James’ health had stabilised. The ‘wow’ moment came when Mrs Buchannan introduced the lifestyle changes which got him off the injections and living what felt like a normal life.

Now in his teens James began working for Central African Motors in the parts department, then a similar job at Puzey and Payne, but gradually, his health began to deteriorate.

By the age of 29 he was living in Harare, the capital of Zimbabwe, but his blood pressure was sky high. It was so bad he had to sleep sitting up and it was decided it was time for him to go for his kidney transplant.

His mum and twin brother Archie travelled to Johannesberg in South Africa, as doctors weren’t doing transplants in Harare at that time.

By then, dialysis was a regular treatment option and he had two lots of dialysis, via a peritoneal tube into stomach.

“I didn’t like it one bit. The tube was twisted. It was awful.”

Then in 1974. James had his life saving kidney transplant from Archie.

“Mum waited with bated breath during the operation; it was all still such a new concept. When she was told all was well, the relief was huge.”

James was kept in a sealed glass room to protect him from infection, standard practice for transplant patients in those days.

Despite initially being in immense pain and fainting every time he tried to get up to walk, his recovery went well and he was able to return to work and enjoy life again.

In 1980, James decided to return to Scotland where he met his wife Kathleen and enjoyed a happy career at Tilcon Quarries as administration officer

“I feel lucky to have my wonderful wife, I thought with all my health issues nobody would marry me,” James said.

Meantime, James decided to trace his ancestry and while doing so discovered two of his great, great uncles died of nephritis. 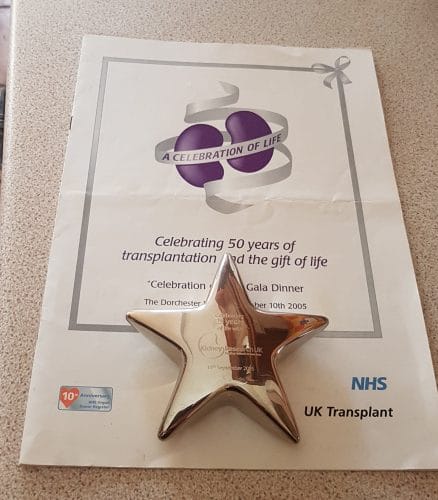 “It seems that it runs in the family! Finally, I found out where I had got it from.

“Research means treatments have moved on a long way since I was first diagnosed. I’d love it if everyone’s kidney transplants lasted as long as mine.”