A Northumberland dad is taking on a Christmas fundraising challenge as a way of paying forward the kindness of friends who have offered to save his son’s life.

Darryl Bingham is stepping into Christmas for Kidney Research UK by running 12,000 steps a day for 12 days to fund life-saving research.

Darryl and his wife Sarah’s’ world collapsed when a rare genetic disorder caused kidney failure for two of their three autistic children.

Sarah’s kidney is a good match for both Ariel and Noah, but sadly dad Darryl is not a match for either.

Darryl said: “Kidney disease silently creeps up with little warning. We had gone from a healthy family to two of our three children needing a kidney transplant.

“It all felt strange, confusing and upsetting.”

Our hope lies in research

As the community rallied to support the family through their devastating news, two of the couple’s friends offered to donate a kidney and are waiting to hear which one will go forward to give Noah the gift of life.

To say thank you, Darryl is running in the hills around Hexham where they live to raise money – wearing a purple cape to represent the Kidney Research UK logo colour.

Sarah, 48, said: “It’s been tough. Our hope for the future lies in research to give our children a better quality of life.

“We know there’s a life ahead full of medical needs, they’ll likely need more kidney transplants as they don’t last forever. They’ll need medication, dialysis. Our youngest meanwhile looks on and watches. He is yet to have genetic testing.

“If research can find a way to make transplanted kidneys last longer, or even for a lifetime, that would be amazing.

“We would love for research to revolutionise the way kidney disease is treated and to reduce the side effects of sickness to make life as normal as possible for people. “

The family’s journey began when Ariel was 11 years old, struggling at school and constantly tired. The couple decided to home educate her, but in her first week she suffered crippling stomach cramps and cold sweats.

A trip to the Royal Victoria Infirmary Hospital in Newcastle became a whirlwind blur and by midnight Ariel was on a ward on a drip.

“A few weeks later we were told she needed a kidney transplant. Our little girl had gone from a healthy child to needing major surgery and lifelong treatment. We picked ourselves up and got used to this new life.”

However, three years later, as their eldest son Noah prepared to sit A levels to study astrophysics at university, his grades nose-dived.

“Academically he is capable, it was totally out of character. He was pale, not eating properly, losing weight. We put it down to exam anxiety.”

Nine days before going to study at UCLAN in Preston, Noah started being sick.

“People don’t realise the horrendous and painful experience of kidney failure,” Sarah said. “He was shaking, he turned yellow, he was screaming in pain.”

The couple took him to hospital where he collapsed as they walked through the door.

His creatinine levels (toxins released by kidneys) hit sky high. Within two hours Noah was sedated and on emergency dialysis in intensive care.

A ray of sunshine came from the young adult kidney coordinator and the renal team at the Freeman Hospital in Newcastle who Sarah thanked for their invaluable support. All of their children have autism, so to walk the journey of kidney disease with the additional pressures of coping with their diagnosis has been especially tough on the whole family.

Noah spent two weeks in hospital, continuing his treatment once he was discharged by attending hospital three times a week for four-hour long haemodialysis sessions.

Juggling his treatment, Ariel’s ongoing medical needs and home educating both Ariel and youngest son Casper throughout was hard going. They only got through this due to the amazing support they received from their local community.

Noah had surgery in October 2019 to insert a peritoneal dialysis (PD) catheter. In December, the family were trained to manage his dialysis at home, which meant the trips to the Freeman hospital every other day were able to stop. 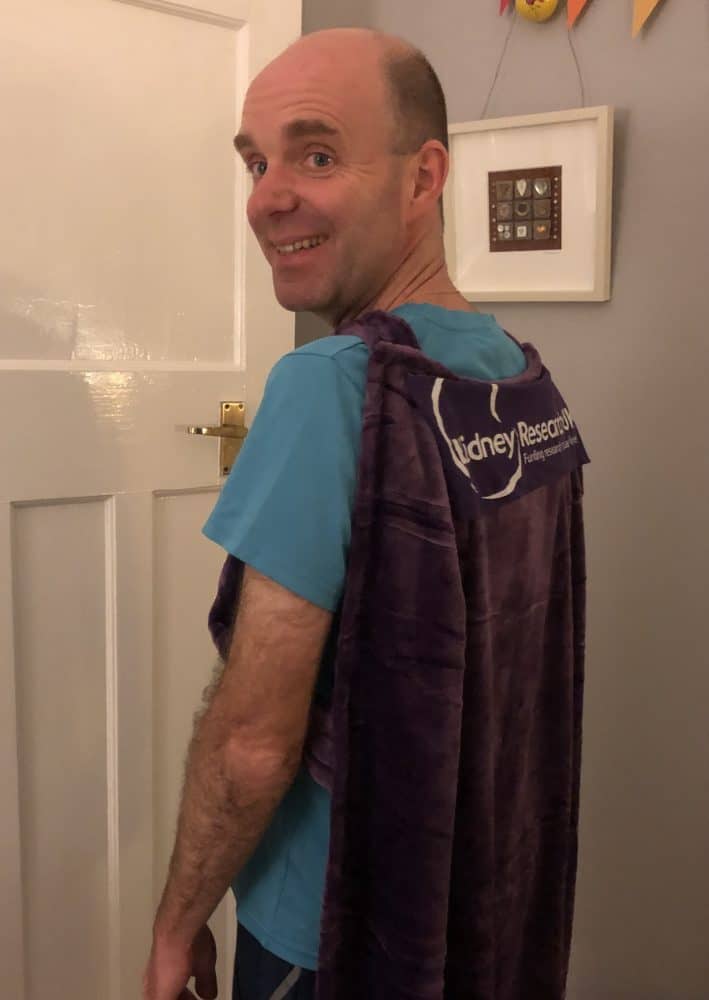 Darryl Bingham is the caped crusader

However, he kept being sick intermittently, but with increasing regularity and by July 2020, after several A&E admissions, Noah was diagnosed with a condition called gastroparesis, where the stomach doesn’t empty properly.

To add to the suffering, Noah experienced a rare allergic reaction to a particular anti-sickness medication.

Now under control with different drugs, it meant he lost a lot of weight, dropping to just seven stone, and now has a feeding tube to build up his weight and strength, ready for his kidney transplant.

Meantime, the family await a date for both children to have life-saving surgery.

Noah and Ariel, are in the 100,000 Genomes Project which looks for genetic links to rare diseases, which uncovered a genetic disorder called homozygous deletion of the NPHP1 gene. The family are yet to learn if Casper too has the same condition.

Marc Shaw, head of community and events at Kidney Research UK, said: ‘Thank you to the Bingham family for sharing their story and a big thank you to Darryl who is joining us to Step into Christmas for us this December.

“This year has been really hard for everyone, and we’re grateful for our amazing supporters who fundraise to help us in the fight to end kidney disease."