A West Norfolk couple have told of the moment their son’s kidney failed, exactly 21 years to the day that dad Stewart South donated to him.

Stewart is a passionate supporter of Kidney Research UK as both his sons Joel, 41, and Oliver, 44, have suffered kidney failure. In the last 20 years he has raised more than £20,000 through a series of charity runs. Here, Stewart, of King’s Lynn, writes of the family’s marathon journey with kidney disease and his own actual marathon:

As a kidney donor to our son Joel in 1999, and with our other son Oliver having a kidney transplant in 2002, I was determined to raise money for Kidney Research UK by running the London Marathon this year.

I had trained hard for the April 26 date, but Covid-19 put paid to the London Marathon and lockdown stopped almost all my training. As lockdown eased, I built up my training again, to try to get my 72-year-old body fit for the new date for the virtual London Marathon of October 4. Inevitably the ‘real’ London Marathon was cancelled and I, and thousands of others, agreed to run 26.2 miles in a multitude of different locations across the world - but just not in the heart of London.

All the coronavirus restrictions had not helped my physical or mental preparations at all. Then I lost a month of serious training with a bad back. But the biggest setback of all was that on May 4 this year, 21 years to the very day that I donated my kidney to Joel, he went to Addenbrooke’s Hospital in Cambridge with suspected kidney failure.

Over the next couple of weeks this suspicion was confirmed. Concerned about Joel, I thought I might have to abandon any thoughts of running a marathon. Joel’s health deteriorated significantly and only improved when he went on dialysis at the beginning of September - a huge relief for him and all the family. He now awaits another transplant. Dialysis has been Joel’s saviour this last few weeks, but it is not an ideal long-term solution. Joel hopes for another kidney transplant so that he can lead a full, unrestricted lifestyle once more.

As Joel’s health improved and my physio worked a near-miracle on my bad back I thought that I could still do this virtual Marathon. Following a late training top-up I was (nearly) ready for the big day.

I had plotted a route close to home in West Norfolk - 23 miles on byroads and about 3 miles off-road. But the weather forecasts became worse as the big day got closer.

They were not wrong. But rain or deluge, wind or gale I could not back out now. Joel and Oliver hired electric bikes so that they could accompany me. 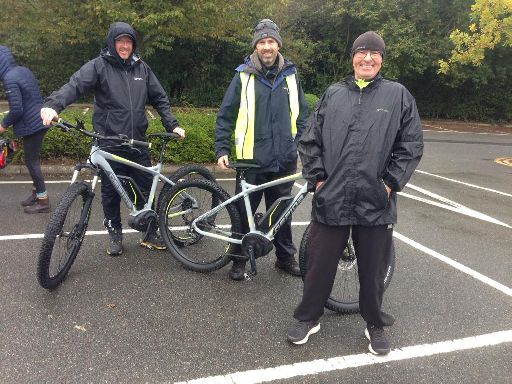 Stewart with sons before the run.

Joel wasn’t sure he had recovered his fitness sufficiently, so e-bikes were the perfect solution. At about 10.15am I set off from Swaffham under their cycle escort, with my wife Ali meeting me in her car at strategic points to supply me with drinks, energy gels, bananas and jelly babies.

For 10 miles or so I had perfect running conditions - cool with a light breeze. Then came the rain and the wind. Just my luck that about 70% of my route was into the ever-strengthening wind. My target was to complete the run in under five hours so that I could, hopefully, qualify for a ‘Good for Age’ place in the real London Marathon 2021.

Some friends braved the elements to cheer us on which was a pleasant distraction to the now-atrocious weather conditions.

As I got to about 20 miles I had had enough and was completely soaked, but I knew I couldn’t give up. I tried to compute the timings for the last few miles to finish in under five hours, but it was hard to get my befuddled brain to function properly.

At last I completed running my marathon (with just a tiny bit of walking) in 4 hours 43 minutes 52 seconds: within my target time. No mass celebrations, of course, in the circumstances, just a glow of satisfaction. My result is under my name or running number 10819.

The support from my family has been immense and so many people have been so generous with their sponsorship. I originally set a target to raise £1,000 for Kidney Research UK, then I upped it to £1,200, and I have now raised over £1,700. I am so grateful to everyone for their support for me and for the excellent work carried out by Kidney Research UK. The sooner kidney disease can be beaten the better.

Take part in a sponsored event or run your own fundraiser. However you want to do it, we're here to support you every step of the way.