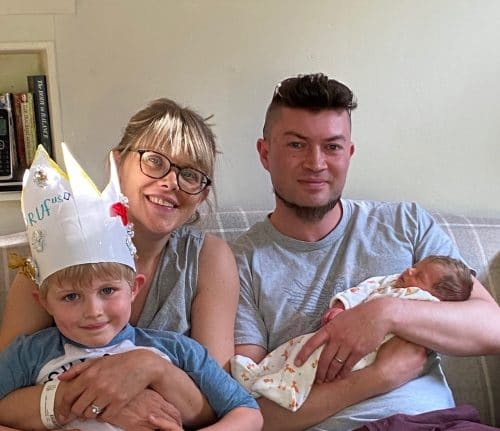 Seven years since James Holdstock became a kidney donor, he has celebrated all the things that were made possible through his gift of life, by undertaking a challenge for Kidney Research UK.

James, 38, an HR analyst from Crowborough, donated his kidney seven years ago, as part of a chain which meant his wife Jess (35) was able to have a transplant and the pair were able to start their family. They are now proud parents to five-year-old Rufus as well as three-month-old Tabitha, who was born during lockdown.

A keen supporter of Kidney Research UK, when the charity was unable to run its London Bridges Walk over seven iconic bridges in the capital, James decided to set his own #MyBridgesChallenge, running 7km a day for seven consecutive days.

James and Jess had a number of bridges to cross during their journey to become a family. Jess, an NHS manager, had a transplant when she was just four years old after her kidneys failed. The transplanted kidney had lasted well, but pregnancy was never going to be straightforward.

James explains: “You have to plan a lot more if you want to start a family when you have a transplant. You almost have to get sign off from lots of doctors. You’re taking a gamble because pregnancy put some stress on the kidney. And by this point Jess’s was quite an old kidney in donation terms and was in decline.

“We realised that we’d have to wait for a transplant before starting a family.”

James stepped forward to donate, but found he wasn’t a suitable match for Jess. Fortunately, the doctors at Guy’s Hospital in London signed them up to the paired scheme.

James explains: “We were lucky that on the first run we got a match with another pair – their donor was a match for Jess and I was a match for their recipient. So seven years ago we did all the operations on the same day and it was a success for us all.”

James tried to prepare before the operation with information from Kidney Research UK and his doctors., but it wasn’t a hard decision. In his mind the advantages far outweighed potential problems . “I thought the benefit of doing it is just incredible, it’s almost like giving life really, certainly a huge quality of life.”

James is a self-confessed ‘fainter’, keeling over during blood tests, he says: “There were a few occasions when I freaked out the nurses! And then when it came to the actual operation I think I passed out before I was given the anaesthetic. But that’s just me, I know my body reacts in this way.”

It was worth the anxiety, he says: “After the operation there was an absolutely huge difference for Jess. She had been suffering from renal anaemia which meant that she was constantly tired, and it was having quite an impact on her day to day life. After the transplant that was turned around.”

Seven years on, James set himself his charity challenge to celebrate, and has just completed it.

“I’m not really a long distance runner, so it was quite tough. I didn’t really feel like running one day, but then I thought of all the things that you can experience with kidney disease and I’d certainly like to have them a lot less than a bit of pain from running. That really inspired me to think this is easy, then off I went!

“It feels brilliant having a family of four now, especially when we didn’t know if it was going to be possible a few years ago. I think it’s life changing, it opened the door to an ocean of emotions.

“I want, for my sake and everyone’s sake, for research to continue.”

Marc Shaw, head of community fundraising at Kidney Research UK said: “It’s heartening to see how research has given James and Jess seven happy years and allowed them to start their family. Without James and others like him raising money and awareness we could not continue to fund research and transform transplants and treatments even further to save and improve lives.

“Everyone and anyone is welcome to take on their own #MyBridgesChallenge for Kidney Research UK, replacing our seven-mile Bridges Walks which were cancelled due to the current pandemic. We’ve seen some fantastically imaginative challenges involving the number seven.”