Dad on the school run gives his kidney

Mark Wilson has been given a second chance of life thanks to a dad from the same nursery-run who donated his right kidney after reading a post on Facebook.

Father of two Mark and his donor, Andrew McCall, had only previously passed each other at the local nursery, exchanging small talk, and have gone from strangers to forging an unbreakable bond.

Mark's wife Victoria said: “What Andrew has done for Mark is amazing. For us, it’s better than a lottery win. There’s nothing more important than health and when someone you love has their health taken away, the way you see everything else in life really changes. We will never find a way to say thank you to Andrew for what he has done for our family. Andrew saved Mark’s life. It means so much to see there are good people in this world.”

Mark added: “I am so thankful and I can’t put into words how great it is to be feeling well again. It’s an exceptional thing that has happened for us all. I can’t thank Andrew enough. We will definitely be friends for life. Before my diagnosis, I was a regular in the gym. In the months and weeks before my diagnosis I was still working out in my usual way but I remember thinking that lifting weights was becoming quite difficult, which was a strange feeling as I have been working out since I was a teenager. I didn’t have any pain or any symptoms at all so when I was diagnosed it was a complete shock. I was the healthiest looking sick guy.”

Victoria posted a story to her Facebook page about running The Great Scottish Run to raise money for Kidney Research UK after watching her super-fit husband crash into serious illness, with no warning, when he suffered kidney failure.

When Andrew, 32, saw the post, he didn’t think twice. With children a very similar age, he could not stand by and do nothing, so he got in touch with Victoria to ask how he could support the family.

The day before Andrew got in touch with Victoria, Mark’s mum, who had reached the final stage of the donor process, received the devastating news that due to an extra vessel on her kidney, she was no longer able to donate to Mark to help save his life. The timing of Andrew getting in touch couldn’t have been better.

Victoria said: “The day after we received the terrible news about Mark’s mum’s donation, out of the blue, Andrew messaged on Facebook.

“He asked how things were progressing and when I told him, Andrew immediately offered to donate. Within 24 hours he was in touch with the transplant coordinator and arranging blood tests.” 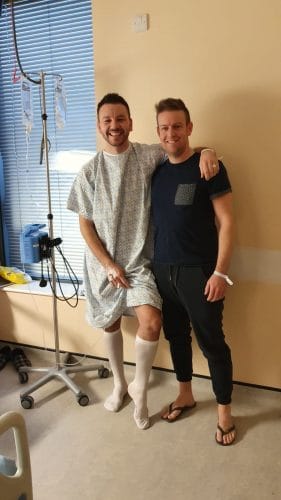 Andrew, an apprenticeship coordinator at West Scotland College, said: “I didn’t question it for a second. I just thought to myself, how would I feel in Mark’s shoes? His family need him. I have two healthy kidneys, but can function perfectly well with one, so I talked about it with my wife Laura and the next day, I was in having tests to see if I could donate. It turned out I was a perfect match. I regularly donate blood, so for me this just felt like the next step. It has been the most rewarding thing I’ve ever done.

“My recovery has been much easier and quicker than I expected, I even ran a steady 5k after just three weeks. I would encourage anyone reading this to consider helping another family and go for it by becoming a donor.”

The transplant operation, which took place in February 2020, instantly transformed Mark’s health, which had gone steadily downhill since receiving the shock kidney disease diagnosis in April 2019 at the age of 34.

Victoria said: “Mark was in a daily routine of going to the gym for an hour before work as the Workshop Controller at Glasgow Audi Bodyshop and was usually full of life and not one for sitting down. We had not long had our second child Lucas and Mark was tired and had headaches, but then all couples are tired when they have a new baby, so we didn’t think anything of it.”

It was only by chance that his health condition was picked up, she added. Mark had a regular health check, given to all Audi employees, which showed his blood pressure was off the scale and they advised him to see his GP for a blood test.

Victoria, 32, said: “We were in the middle of dinner when the doctor called Mark and said to go to A&E immediately. The GP actually thought there was an error with the blood results and not to worry. He said with results like his he shouldn’t be standing, and the fact he walked into the GP surgery that morning looking so well, it was unlikely the results were correct, but to get checked anyway. Unfortunately for Mark, the results were right and this was when life changed in an instant.

“Mark had gone from a healthy man at the gym every day to one with stage five kidney disease and just 6% kidney function. It felt unreal. We had no idea how this could have happened with no warning signs.

“We were due our first family holiday to Orlando in June 2019, but Mark’s renal consultant advised us not to go as Mark might be on dialysis by then. The news was life changing. It was a terrible time for us all.”

The hospital was over an hour away so juggling hospital and life with two small children Emilie, 5, and Lucas, 18 months, was a nightmare, Victoria added.

Within four months of finding out he had kidney disease, Mark was on dialysis four times a day, forcing him to give up work.

Mark was on dialysis for six months and in February 2020, the operation went ahead with great success. Mark’s kidney function went from 6 per cent to almost 79 per cent in just over a week.

The change in Mark was instant. “He looked so much better, his skin no longer looked grey and his eyes were so bright. The real Mark was back!” Victoria said.