Goodwood Estate sporting executive thanks medics for saving his life

A dad of two who collapsed 400 metres from the end of a marathon when his kidneys started to fail, has thanked the medics who saved his life.

Jamie Williams, 39, was taking part in the Great South run for the third time and was close to finishing, when he collapsed and was taken to hospital where he was placed in an induced coma to save his life.

Jamie, a sporting sales executive at The Goodwood Estate, said that severe dehydration and overheating, resulted in his kidneys, then his liver to start shutting down.

“Thanks to research into treatments, the team of medics caring for me, knew exactly what to do to save my life. Without that I wouldn’t be here today,” Jamie said.

The irony, he added, is that medics had to cut off his Kidney Research UK running vest when he got to hospital.

“I was running to raise money for the charity because my daughter receives regular monitoring due to scarring on her kidney,” he said.

“She suffered at the age of six due to a big infection. Luckily, she is OK and just needs to be monitored as one of her kidneys is at 33% function and the other is fine.

“It was because of that I decided run to raise money for Kidney Research UK. It was the third time I had entered The Great South run and had finished in good times previously with no concerns.

“I had prepared well with my friend Dean Smith, a PT instructor in the army, so all seemed good. I have always been sporty and my finish times were around the 1hr 30 mins mark.

“However, this time things were very different. The first nine miles were good but between that and the last 400 metres from the end it went downhill.

“Something went very wrong. One minute I was running alongside Dean and the next apparently I said to Dean I don’t feel well. I then collapsed and don’t recall anything else,” Jamie said.

“Luckily, Dean caught me which is quite a feat as I am 6ft5! He managed to prop me up and tried to give me some water. I couldn’t even hold the bottle. He thought I had suffered a stroke.”

Dean borrowed a phone from somebody in the crowd to call Jamie’s wife who was waiting at the finish line with their children and other family and friends.

“Friends could see my progress on a tracker but then I just stopped moving. Dean’s wife Amy and my wife Gemma came through the in-running runners to find me. I was being sick and started fitting. 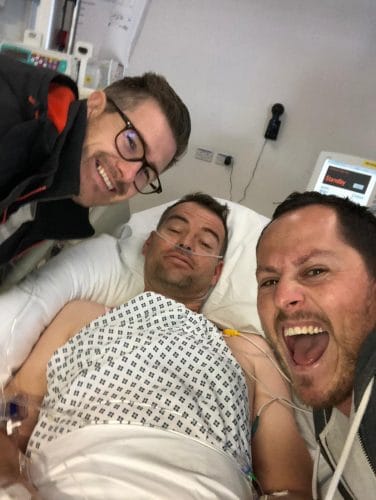 “When the ambulance got me to the medical centre my eyes were rolling to the back of my head and I still fitting. I was taken to the QA in Portsmouth where my temperature was sky high.

“Doctors put me into an induced coma to save my life. My creatinine levels were in overdrive and were dangerously high. My body was literally poisoning itself. My kidneys began shutting down and so did my liver.

“While in the coma medics worked to flush out my system for 24 hours and when I woke up I felt like I had an almighty hangover and was very weak.”

Jamie of Waterlooville, Portsmouth, was kept in hospital for eight days until he was properly recovered.

He said: “I am now back to playing football, golf and running on a treadmill. I’m coming to terms with what happened due to becoming severely dehydrated and over – heated but will never forget those that saved my life.

“I am forever in debt to my 1:1 nurse Helen Green, Chris and Dave the paramedics and the hospital team. They are all amazing. It could have been a very different story.”