A Langstone dad whose donated kidney failed more than seven years ago will prove nothing can stop him when he takes part in the Westfield Health British Transplant Games at the end of the month.

David Griffiths, (43) will be taking part in the swimming competition at the four-day festival of sport and life in Newport on July 25 – 28. David, who receives dialysis at Newport Renal Unit, had a kidney transplant from his mum, Jenny, in 2006, which lasted for seven years. Since becoming a donor, Jenny has used her fundraising talents to raise over £45,000 for Kidney Research UK. 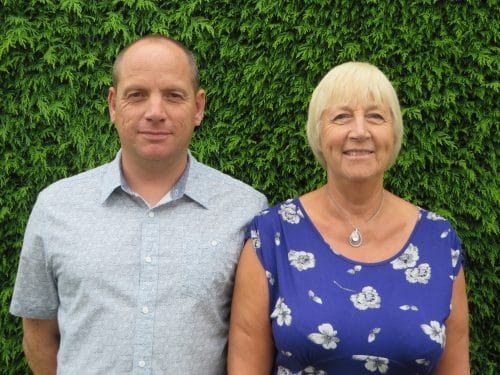 The antibodies in David’s body created as a result of having one transplant, mean his chances of finding a match again are lowered. However, he is planning to take part in a Kidney Research UK funded trial into reducing antibodies, which could help.

David said: “I plan to get on the Improving Transplant Opportunities (ITOPS), trial for two weeks. I may be lucky enough to get the right drugs and get the transplant I need. There are so many things I’d like to do which dialysis makes very difficult.

David, who works for BMW in Newport, has managed to fit his swimming training around his dialysis, work commitments and family life. He added: “I’ve been training for about six months and I’m secretly hopeful I might do alright as my times are quite good now, but you never know who you will be competing against.”

David’s wife Ginny, his son Joel and his mum Jenny will all be cheering him on at the games.

Dr Sian Griffin, who is leading the ITOPS trial will also be at the games, talking about her work.

She said: “It is because of the funding received from Kidney Research UK and the contributions made by individual supporters that this trial is even possible.”

Kidney Research UK at the games

Over 2,500 people are expected to attend the transplant games which take place in a new location every year. As one of the event sponsors Kidney Research UK will be present at the games, hosting talks from researchers and competitions. To find out more, follow the charity’s official Facebook page and Twitter feed.

David will join thousands of transplant survivors, including children as young as three, who are taking part in sports such as athletics, basketball, cycling, football, golf, snooker, swimming, tennis, volleyball and The Donor Run, an inclusive event open to the public.

The aim of the games is to raise awareness of the importance of organ donation.

Wales was the first to introduce a soft opt-out system for the organ donor register. However, the final decision on organ donation is still made by bereaved families.

This is why the games organisers are keen to spread the word that everyone needs to make their wishes regarding organ donation known to family and friends – whatever they may be.