All things kidney over a pint or two! by Sarah Williams

For the third year in a row, Kidney Research UK has partnered with Pint of Science, the international annual science festival. This festival brings leading scientists and researchers to local pubs in cities across the world, so people can discover and learn about science over a pint. It now runs in 21 countries worldwide.

In the UK, some 40 cities held Pint of Science activities from 20-22 May. Kidney Research UK funded researchers and their teams spoke at events in Bristol, Cambridge, London and Edinburgh. 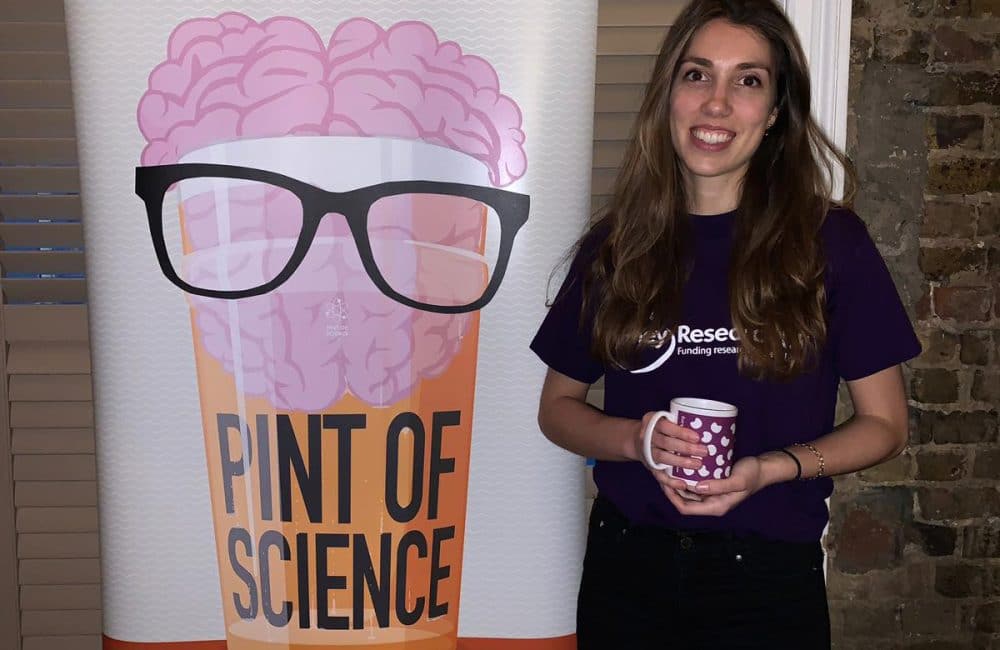 The Boardroom in Bristol saw Drs Gavin Welsh and Carl May present to a packed room, focussing on how extraordinary a filter the kidney is. They explained how damage to the filtration cells can cause a massive system breakdown leading to serious kidney conditions, including nephrotic syndrome. Understanding more about the basic biology of the glomerular cells has already altered thinking about kidney disease progression. As a consequence, they are beginning to be able to identify mechanisms and biomarkers that one day could potentially be directed at a specific problem area in a patient’s kidney.

At the Granta pub in Cambridge, the audience heard from three researchers - Professor John Bradley, Dr Menna Clatworthy and Professor Margaret Ashcroft - who described how genetics and oxygen both have relationships with the kidney and play a role in kidney health and disease. The experts explained how 3-D cells are being used to help understand more about the role of genetics in kidney cancer and how genetic analysis of kidney biopsies can tell if it’s a ‘good’ or ‘bad’ kidney before transplantation.

During the middle of the evening the audience heard how the kidney is sensitive to oxygen, which is how it is able to adjust EPO, a hormone made by the kidney that regulates oxygen carrying red blood cells. However, this useful ability also means the kidney is easily damaged by hypoxia (deficiency in oxygen reaching the tissue).

The secret life of kidneys was the topic explored at The Old Bell Inn in Edinburgh. Every seat was taken, and more people were standing at the back engrossed in the presentations from Professor Jamie Davies, Dr Eoin O’Sullivan and Dr David Munro.

Professor Davies spoke about his work involving regenerative medicine and stem cells, focussing on how his lab is making miniature lab-grown and simplified kidneys that can be used for investigating renal disease and testing new therapies.

The Edinburgh event even saw 12 people sign up to the Organ Donor Register.

Transplants and dialysis were the theme of the evening at The Jam Tree in London, with presentations by researchers, Dr Stephen Marks and Frederica Poli, generating lots of questions from the floor.

The audience learned about the history of and developments in renal transplantation, including about treatment and care of tiny babies with kidney disease. Dr Marks also talked about how 3D printing is beginning to revolutionise the way transplants are carried out. A patient of his had had a 3D model of their kidney printed at London’s Science Museum. It so happened that a member of the audience worked at the museum and was even involved in the printing project. So, it was a great evening of connections too!

A showcase for research

Elaine Davies, Director of Research Operations at Kidney Research UK, said: “Kidney disease is on the rise and many more lives are being impacted. Being involved with the Pint of Science festival gives us and our researchers a very public opportunity – meeting in local pubs – to raise awareness of what fascinating organs the kidneys are and what happens when they go wrong. Most importantly the festival gives our researchers a great opportunity to showcase their research, in lay language, and what they are doing to prevent kidney disease and improve treatments for kidney patients.”

Dr Carl May who presented for Kidney Research UK in Bristol has written a blog for us about his involvement with Pint of Science.