Rachael Camidge was born with one kidney. After the birth of her son in 2003, her health slowly began to deteriorate and for the last three years she’s been in end stage renal failure and has had to be on dialysis.

For Rachael and her husband, Mark, all of that changed on Friday 3 August 2018.

The Camidges were asleep at their home in North Norfolk when Rachael got a call at 3am. A donor kidney had become available – they just needed to be at Addenbrooke’s Hospital in Cambridge by 5am. On arrival there were lots of tests and checks. They finally got the go ahead at 1pm and Rachael was in theatre having a kidney transplant.

“Rachael had been ill for about 14 years and her health was getting worse. Even with home dialysis, the impact on us and our family has been tremendous. Kidney disease is really devastating for everyone it comes into contact with. But that call in August and Rachael’s transplant, has changed our lives,” said Mark.

To try and help others in the future, whilst Rachael was on dialysis, Mark wanted to give something back and got together with friends, Andy and Craig to begin fundraising for Kidney Research UK. The trip was organised and with the transplant done it was all systems go for the October trip.

He said: “Rachael’s treatment and transplant would not have been possible without amazing NHS staff, the donor register and Kidney Research UK. We wanted to raise awareness of kidney disease and the amazing work that Kidney Research UK does for those who suffer from this incurable illness.

Thank you from Zamezi18 whitewater rafters

“What better challenge to do than whitewater rafting 50km down the mighty Zambezi river through Zambia and Zimbabwe,” said Mark. “Not only are these some of the biggest and fastest waters in the world but they are known to be crocodile and hippo infested.”

As they prepared for the rafting expedition, @Zambezi 2018, as they called themselves, did other fundraising activity including a highly successful silent auction, with prizes that included a football shirt signed by 18 of the Manchester City team and an England cricket shirt signed by Michael Vaughan.

At the end of October, the team arrived in Zambia to begin their epic four-day journey. The guys rafted by day and camped by the riverside at night. Even Beanie joined them, making his first trip to Africa and the challenge of whitewater rapids. 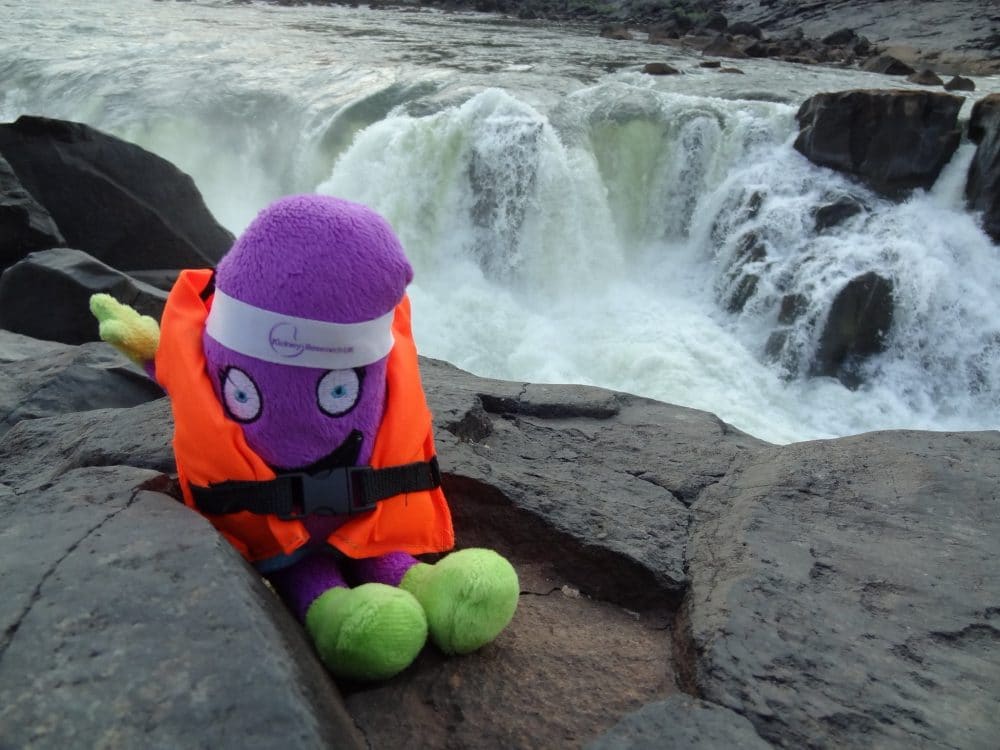 Beanie on the Zambezi

The three friends funded the trip entirely themselves, so ALL the money raised will go to Kidney Research UK. So far, they have raised a staggering £9,700 and money is still coming in.

“Rachael was ill for about 14 years but describes how she is feeling now as if she’s ‘woken up again’. It’s lovely,” Mark said.

“All of a sudden the desire to raise money to fund research, and to get more people registered as organ donors is even more important to us. Organ donation saved Rachael’s life.

“We know of over 40 people who have signed up off the back of Rachael’s story, and we are keen to encourage everyone to join the register and tell their friends and family what they’ve done. Just one person can potentially save up to seven others. What an amazing gift to be able to help someone live in the event of your death.

“So I urge people to sign the organ donor register, to give others a chance of life.”

You can find out more about team @Zambezi 2018 on their fundraising page.

Find out more about joining the Organ Donor Register here.

Thank you so much to team @Zambezi2018 for all you have done to raise awareness and to help fund life-saving research into kidney disease.