What would encourage you to climb to Everest Base Camp? For the Goodall brothers, James and George, it was their dad’s lifesaving kidney transplant that motivated them to take on the gruelling 5,644m ascent.

Their hike over 115km has involved 11 days of trekking through both monsoon and at high altitudes climbing for up to eight hours a day – all for Kidney Research UK. 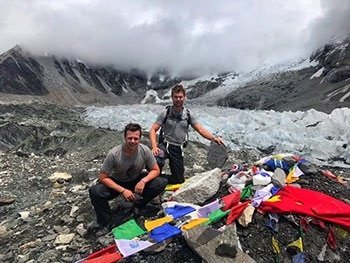 Both George and James hoped their fundraising would reach their £200 target, but with £960 already raised so far, the brothers are completely overwhelmed with the amount of support they have received.

“We can’t thank you enough for the generous support everyone has given us; it has really spurred us on and has made us really happy as it’s such a great charity for us to champion.”

“This has been an experience of a lifetime and if we can raise money for a cause that’s so close to our hearts, then all the better!”

Kidney Research UK is a charity that means a lot to the Goodall family. For six years their dad, Richard, struggled with kidney disease, leaving him unable to do some of the everyday activities he had always shared with his sons, simply because he was too exhausted as his kidneys deteriorated.

After over four years on peritoneal dialysis and waiting on the transplant list, he received the call to say there was a kidney for him. In October 2015 Richard’s transplant was successful, and his life changed.

Having previously fundraised for the charity in the name of their dad, George and James wanted to do something different and chose the Everest Base Camp trek as both a personal challenge and a new kind of opportunity to fundraise.

They finally reached the camp just three days ago, calling the final stretch “the toughest 8 hours ever!”.

Mum, Clare, said of her sons: “Richard and I are so proud of them, not just for coming up with the idea, but for throwing themselves right into it, completing the long trek and raising money at the same time. They have both worked whenever possible since last year to fund the trips themselves.

“They know what a difference fund raising will ultimately make when more people suffering from kidney failure are able to benefit from transplants as their dad has.”

Find out more about their adventure. 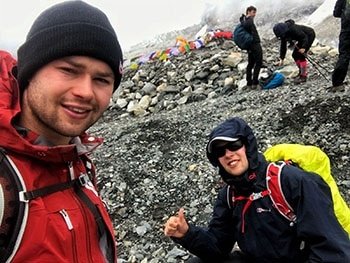