A 13-hour, 312km gruelling solo bike ride, with mountain climbs of 5,000m, saw Ian Logan complete a tour of the island of Mallorca, to raise funds for Kidney Research UK.

Ian was joined on his epic journey by Transplant Games multi world cycling champion and kidney transplant patient, Ottlile Quince, who provided support and refreshments throughout the tour. 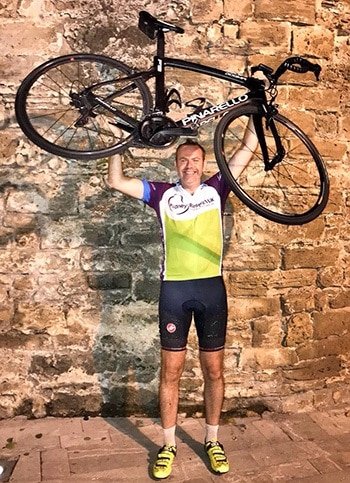 A NIHR clinical lecturer in nephrology, Ian is extremely passionate about helping people with kidney disease and raising awareness of the importance of organ donation.

“Every day in clinical practice I see patients that will die with kidney failure, or require lifelong dialysis, because of a shortage of donor kidneys preventing transplantation. I wanted to do something special to help raise awareness of transplantation, in the hope that people will sign up to be an organ donor after their death, or even consider being a live kidney donor.”

His solo ride on 11 August was done to help raise awareness of Kidney Research UK and the importance of living donor kidney transplantation. He asked Ottilie for a helping hand.

She agreed to help Ian and accompanied him on a scooter, meeting him at designated checkpoints to provide food and water as well as motivational support.

“I was certain that Ottilie thought I was crazy for doing this, alone, during the summer heatwave, but I think she also understood my motivations.”

Ian’s epic challenge began about 5am. With soaring temperatures and ferocious climbs, Ian was so pleased that Ottilie was alongside helping him rehydrate and refuel.

“After sunrise, the temperatures soared, and I was losing fluids faster than I could replace them. I had to reduce my pace on the mountains because my heart rate was reading persistently high.

“I lost count of how many times Ottilie refilled my water bottles, as she told me about her courageous 12-year experience with renal failure and transplantation.”

Some 11 hours into his journey, Ian was faced with a new challenge.

At around 275km, he lost both his phone and GPS signal. Then both of his bicycle lights died.

As Ian says himself, it all became a little concerning. Would he be able to finish the race? How lost could he get in the mountains?

“Only when I remembered the numerous messages of support I had received along the way from family, friends and colleagues, I found the motivation to push on. I temporarily used the North Star to navigate until my GPS kicked in again and put me on the right route.” 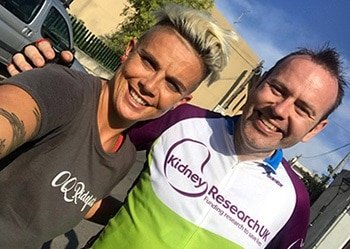 Ian found his way to Ottilie at their next designated checkpoint. She then accompanied him for the final 30km, lighting up the road with her scooter headlights.

“I felt exhausted but exhilarated and rather emotional.”

Ian’s mood was buoyed up even more the next day when he received four messages from people, whom he’d never met, that had signed up to becoming organ donors after seeing his ride on Twitter.

Ian was overwhelmed by the amount of support he had been given and for all the donations that had been made towards Kidney Research UK in aid of his ride. So far, he has raised over £1,100.

“I can never repay Ottilie and her mother for allowing me to share their story, and for their fantastic support on my ride; I could not have finished it without them - thank you so much.

“I am also extremely grateful to all those, including Kidney Research UK, for their invaluable messages of support.”

If you want to donate towards Ian’s Majorca cycle ride or to find out more, click here.