Two brothers will be among those celebrating the 70th anniversary of the National Health Service today.

Paschal Power donated his kidney to his brother, Liam, 25 years ago and says neither of them would be here today were it not for NHS staff. 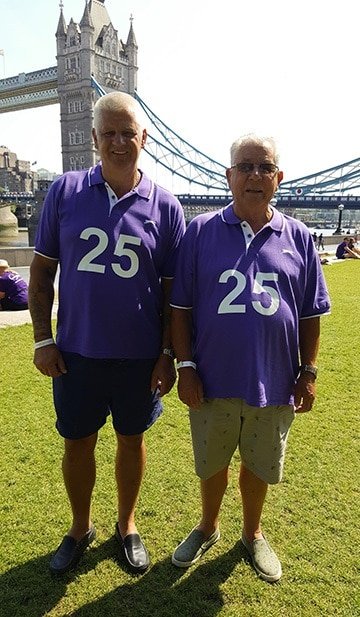 Paschal said: “I owe them everything. Not only did they save my brother’s life with one of the first ever living donor transplant operations, but they also pretty much put me back together following a pretty nasty accident.

“I’m from the Republic of Ireland and, at the time, living donation was somewhat frowned upon, but the NHS were happy to do it. They were cautious and said they expected the transplanted kidney to last ten years at the most; they were also concerned about my health. Twenty-five years on and we are as fit as fiddles.

“The transplant bought Liam time with his family and it was a no-brainer for me, as he had three kids at the time.”

More than 40 family and friends joined them for the seven-mile walk across eight of the capital’s most iconic bridges on Sunday, raising thousands for the charity.

Paschal said: “It’s such a great event, we love it. Until the Kidney Research UK Bridges Walk I had never met a living donor. It’s such a great atmosphere and every year it gets better and better.”

Tracey Murray, Head of Community Fundraising at Kidney Research UK, said: “We’re delighted that Liam and Paschal brought their huge group of family and friends to our London Bridges Walk to celebrate their transplant anniversary. It’s the perfect event for marking important moments like this and raising funds to help stamp out kidney disease.

“Kidney patients have much brighter outcomes than they did at the inception of the NHS 70 years ago, but there is still a long way to go.”