Gift of life for Father’s Day after pioneering transplant

One father won’t be expecting a present from his son this Father’s Day after receiving a new kidney from him.

Jerry Sherriff, 75, from Broadstairs in Kent, had the lifesaving transplant at Guy’s Hospital, London, last year after his son Matt, 48, offered to donate his kidney. Teams at the hospital ensured that the transplant was a success, despite the pair having incompatible blood groups, by overcoming potential rejection of the organ. 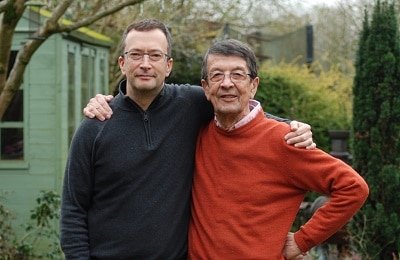 Jerry, who also has a daughter, five grandchildren and two great-grandchildren, started to experience problems with his kidneys in 2009. Doctors discovered that they were only functioning at 30 per cent and by 2016 this declined to just nine per cent.

He said: “Around five years ago I was told I would eventually need to have dialysis or a transplant. Matt came forward and insisted on being my donor. I was reluctant to put him through the process but he insisted and I gratefully accepted his offer.

“Without him it would have taken years to get one on the waiting list and I would have needed to have dialysis. Because of my age there was also a risk that I may not have been fit enough to have a transplant in a few years’ time.”

After a series of tests the team at Guy’s decided that Matt was a good tissue match despite Jerry being blood group O and Matt being B. In the weeks before his transplant Jerry had a number of plasma exchanges to lower the amount of antibodies in his blood, reducing the risk of Matt’s organ being rejected – because they had differing blood groups. The pair had their operations on the same day in March last year and were in the beds next to each other on the ward.

Jerry said: “Immediately afterwards my new kidney was functioning at 80 per cent. My family were amazed to see how much better I looked. Since then I’ve been less tired and I’m able to play golf and do gardening again. I am so grateful to Matt and proud of what he has done for me.”

Matt, a father of two from Malmesbury in Wiltshire, who has raised hundreds of pounds for Kidney Research UK, said: “When dad said he needed a transplant I knew I wanted to donate. I saw how his kidney problems were affecting his health and energy levels so it felt very natural to help give him back his quality of life.

It meant I had a chance to pay him back for the things he had done for me as a kid. I had a really nice childhood and had opportunities growing up, such as memorable family holidays, which my peers didn’t have.

Matt, who works in a bank, said he could see the difference in Jerry as soon as he came back to the ward after theatre. He said: “Dad had been grey and pallid before and now he had a pink flush to his face. It felt amazing to know that was down to me. He looked 10 years younger instantly. It was also great to know I’d stopped him from needing dialysis.”

The pair next saw each other six months later once they were both fully recovered, due to the distance between their homes. Matt said: “I saw an even bigger difference in Dad then – he was brighter, chirpy, able to interact more and had more energy. The experience has brought us and the whole family even closer as it’s been a major thing for everybody. We are spending Father’s Day together this year which will feel really special considering this is the first one we have spent together since the transplant.

“I would encourage other people to donate. I think there is a misunderstanding that you have to be a perfect match. Now there are ways to overcome things that stop people donating and people aren’t aware of that. There are also misconceptions about the donor’s quality of life with one kidney. Some people think I need dialysis and others think I can’t drink alcohol, but that’s not the case and you’d never know I only had one kidney by looking at me. Now I’m fitter than I’ve ever been and living a completely normal life.

“We received an unbelievable level of support from the kidney team and ward staff at Guy’s – the care was top notch. Everyone was amazing and sympathetic to how Dad and I were feeling. One nurse was like my guardian angel – every time I woke up she was there helping me. The care was something for the NHS to be proud of.”

Geoff Koffman, renal transplant surgeon at Guy’s and St Thomas’ who carried out Jerry’s transplant, said: “Incompatibility affects 30 per cent of people on the waiting list, making it harder for them to have transplants.

“At Guy’s and St Thomas’ we are looking at a number of techniques to overcome the problem of incompatibility so that more people can receive lifesaving kidney transplants. It’s wonderful to see patients like Jerry, who may have been waiting a long time for a kidney, have their lives transformed by a transplant thanks to the pioneering techniques we are using. We are always in awe of the generous donors who make this remarkable sacrifice.

“In the UK around 5,000 people wait for kidney transplants every year. We have one of the biggest living donor programmes in the country, helping more people to get the transplants they desperately need.”

If you've been inspired by Jerry and Matt's story, find out more about joining the organ donation register.