Stewart South is marking his 70th year in style with an epic series of personal challenges to raise money for Kidney Research UK and Addenbrooke's Hospital.

Both Stewart’s sons are living with kidney failure, which is why he is doing all he can to raise money for his two favourite charities. 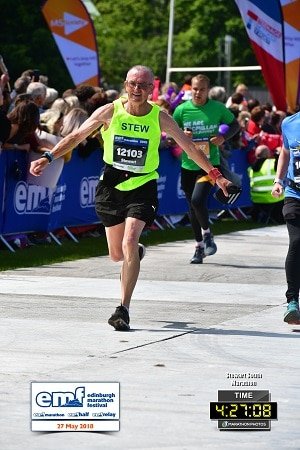 Stewart, who lives near Kings Lynn, said: “I donated a kidney to Joel in 1999 after he became seriously ill. Later our other son Oliver suffered kidney failure and he received a kidney from an anonymous donor in 2002.

“Both our sons have Alport Syndrome and even though they have both had successful kidney transplants they still suffer some of the Alport side effects, such as hearing and eye problems.”

Stewart planned seven key events for his challenge and has already completed three of them - the Norwich Half Marathon on April 15 (completed in 2h 4m 36s), the Edinburgh Marathon (which he completed in 4hrs 27min 8 secs) and King’s Lynn GEAR 10K on May 6 (completed in 55m 47s).

Just for extras he had also vowed to run at least seven Parkruns (5K distance) throughout the year and has completed nine to date.

With a target of raising £2,000 Stewart has just another £500 to raise in order to smash his target.

And he added: “My top tips for anyone facing the daunting task of fundraising, whatever the target, would be to get creative. You have to believe in the cause and I know that research into kidney disease offers hope to families. The seven in 70 just adds a bit of a hook for people. Fundraising isn’t easy and when you’ve done it before like I have, it gets harder to ask the same people. The trick is to get the word out there, I have had my story in local newspapers, parish magazines and on radio – it’s all about spreading the word."

Head of community fundraising at Kidney Research UK Tracey Murray said: “What Stewart is doing is absolutely phenomenal. We are bowled over by the lengths he is going to and the challenges he is taking on to be able to power more lifesaving research through his fundraising.”