The number of people diagnosed with diabetes in the UK has more than doubled in the last twenty years, according to Diabetes UK.

New figures show there are now almost 3.7 million people living with the condition in the UK, an increase of 1.9 million since 1998. 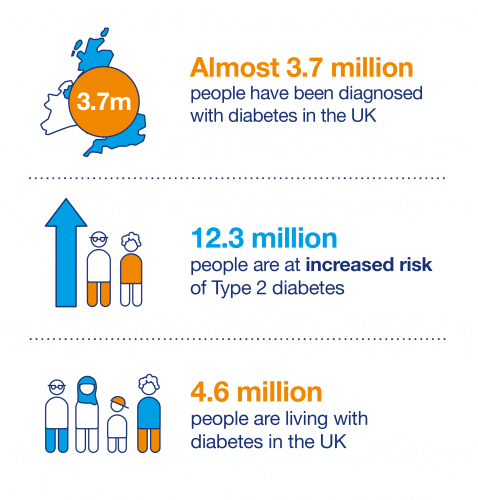 Chris Askew, chief executive of Diabetes UK, said: “Both Type 1 and Type 2 diabetes are serious conditions that can lead to devastating complications such as amputation, blindness, kidney disease, stroke and heart disease if people don’t receive a timely diagnosis and begin receiving the right care.”

We want the Government to recognise the seriousness of the growing diabetes crisis, take action to help those at increased risk and help us turn the tables on this devastating condition.

Bradford has the UK’s highest prevalence of diabetes, with more than one in ten people (10.4 per cent) living with a diagnosis. Conversely, Richmond in London has the lowest incidence, with 3.6 per cent of the population affected. The national average is currently 6.6 per cent.

Almost nine in ten people diagnosed with diabetes have Type 2, and it is estimated there are nearly 1 million people currently living with the condition who don’t know they have it. Counting this undiagnosed population, the total number of people living with diabetes reaches 4.6 million.

While Type 1 isn’t currently preventable, three in five cases of Type 2 can be prevented or delayed by  helping people understand their own risk of developing the condition − and how to reduce it – and by securing early diagnosis for those known to be at high risk.

There are an estimated 12.3 million people at increased risk of Type 2 diabetes in the UK, and obesity is the leading cause in the majority of preventable cases.

With so many at risk of developing Type 2 diabetes − including growing numbers of children − Diabetes UK is calling on the Government to take further action to tackle childhood obesity, by introducing stricter restrictions both on junk food advertising to children, and supermarket price promotions for unhealthy foods.

To support this work, Diabetes UK is also a partner in the NHS Diabetes Prevention Programme in England. This programme supports adults who are at high risk of Type 2 diabetes to make lifestyle changes that could reduce their risk and demonstrates the urgent need for similar developments in the other three nations of the UK.