An Irish stand-up comedian is about to embark on a UK tour with a show all about his experience of donating a kidney to his brother.

Jarlath Regan’s show – Organ Freeman – received rave reviews at the Edinburgh Fringe festival last year and he hopes it will go down as well with UK audiences.

Kidney Research UK caught up with Jarlath, who is probably best known for his Irish Man Abroad podcasts – which has over a million followers. 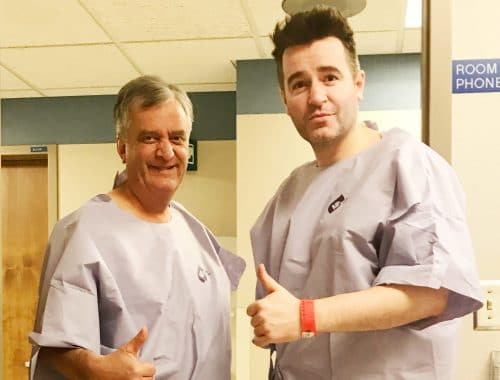 He said: “It’s about my own experience, I’m not trying to push anything down people’s throats about why they should opt in or opt out of organ donation. I was in a position to able to donate to my brother. Not everyone can or should do it – it has to be for your own personal reasons.

“Just like the donation, the show felt like the right thing to do. Don’t get me wrong I never went into the donation process thinking this will make great comedy, but like so many things in life I started to see an opportunity for jokes and a chance to raise awareness in a way it had never been raised before. In laughing about it, it has given me closure and allowed me to move on. When you laugh at something you take away its power.”

Jarlath flew to America, where his brother lives, to have the operation. His brother had a hypoparathyroid problem which led to the need for a kidney donation. The transplant changed his life and has allowed his sibling to carry on with more energy and vastly improved health.

Jarlath’s Edinburgh show received nothing but positive praise from reviewers and audiences.

To find out more or to book tickets. Listen to Jarlath's podcast about the donation.