Trustees are the people in charge of a charity. They help to make the UK the sixth most giving country in the world. They play a vital role, volunteering their time and working together to make important decisions about the charity’s work. This week (November 13-17) is Trustees’ Week, an annual event to showcase the great work that trustees do.

One of our latest recruits

Deirdre Jennings is one of Kidney Research UK’s newest trustees. She is an experienced managing director and consultant in financial services and the Fintech industry, working across Asia and Europe. She has a background in research, with a PhD in Chemical Systems and has recently completed a professional certificate in accounting. 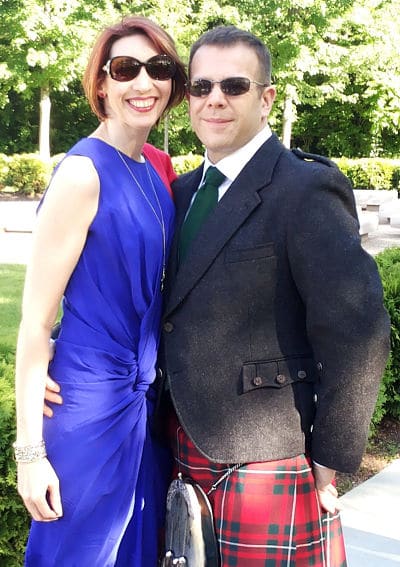 Speaking about how her partner, Jamie, was diagnosed with kidney disease in 2013, Deirdre said: “We went for a romantic spa weekend to ChivaSom in Thailand. As part of the package, they did a mini health check. Jamie was very fit but it turned out his blood pressure was off the scale. Back in Singapore, they diagnosed the problem – everything was fine with his heart but he had chronic kidney disease which they managed with medication.

“Two years later in 2015, on holiday in France, it turned out that what Jamie thought was flu was actually complete kidney failure. His creatinine was 5000, potassium 15, and one third of his lungs full of water. Jamie was in ICU for a week with dialysis, oxygen and tubes everywhere. I am a widow and my husband died in 2003 from Diffuse Scleroderma so there were a few dark jokes of (a) saving his life by insisting he go to hospital and (b) being a ‘black widow’. I keep telling him that the two extra weeks in Paris does not count as a romantic holiday, no matter how luxurious the American hospital in Paris was!

“On return to Singapore, Jamie started dialysis three times a week and I researched live donations and dialysis holidays. Singapore has fantastic dialysis facilities as there is a very high incidence of kidney disease and diabetes-related kidney disease in Asia. The transplant waiting list is nine years in Singapore but is only open to Singaporeans; I wasn’t allowed to be a living donor under Singaporean rules as we were not married. This accelerated our plans to return to the UK.

“In June 2016, we moved to Edinburgh to be near Jamie’s children, and settled in quickly – with amazing neighbours, contract jobs and, of course, the fantastic and free NHS. Jamie was offered home dialysis, but this was put on hold while I did the living donor tests. Unfortunately, my kidney function wasn’t good enough to be a living donor and then we discovered the home dialysis grants were no longer available as they had transferred from the NHS to the council – it felt like a double blow.

“But we did not let dialysis stop us living life to the full and went on several dialysis holidays. It’s amazing what you can organise with enough notice! We have been skiing, to weddings in Portugal, and summer holidays in Crete. Definitely don’t let dialysis stop you from having fun.

Definitely don't let dialysis stop you from having fun.

“2017 saw us in new jobs, buying a house, moving and getting engaged. Then, in August, we got approval for home dialysis. The home dialysis people say ‘the quickest way to get a transplant is to have home dialysis approved’. And so it turned out … on September 12 we got ‘The Call’. I happened to be home as I had the day off to do my Open University exam in the morning. Completely unexpected and out of the blue at 4pm, while watching Game of Thrones, the transplant coordinator called to say ‘We have a kidney. How soon can you be in?’ Well, we threw stuff into a bag and were in the car 15 minutes later and at the hospital by 4.45pm. Jamie was hooked up to dialysis, tests done by 5.30pm, then 7.45pm he was wheeled into theatre.

“Eight hours later Jamie was out of theatre with a new kidney and in recovery. This too had its ups and downs. ‘Craig’, as we named the kidney, was a bit slow to kick in. Apparently, this can be quite normal for deceased donor kidneys but the biopsy showed no rejection. Jamie was home after 14 days and went from peeing 10mls every 10-15 minutes to, eight weeks later, walking two miles at weekends and refereeing rugby matches. We are so grateful to the family who gave permission for the donation, as it truly is an amazing and life changing gift.

“This is why I was drawn to Kidney Research UK - because I understand what they do on a professional and a personal level.

“I feel with my background in sales management and strategy, I can add value for business development. From being very close to the personal impact of kidney disease I can always give that point of view. I passionately believe in the value of pure (basic science) research, as well as clinical research, in contributing to new developments and insights for treating chronic diseases.

“If someone wants to be a trustee I would recommend they choose a charity and a cause they are passionate about, as it is a time commitment. I probably spend about one to two days a month between trustee duties and helping with fundraising. I did a fundraising event for Kidney Research UK before I became a trustee which allowed me to get a feel for the charity. Being a trustee for Kidney Research UK is very rewarding and I have met the most amazing people – trustees, employees, researchers and patients.”

Kidney Research UK has 15 trustees. All the trustees bring a different set of skills and experience to their role. As well as renal specialists, there are also patients and people who have cared for a loved one with kidney disease. Trustees are the backbone of any charity and never more so than at Kidney Research UK.