Jenny Griffiths started fundraising after she had donated a kidney to her son David ten years ago. Today she leads a team of fundraising volunteers in her local area of Monmouthshire, Wales and has raised £39K for Kidney Research UK in that time.

Here is her story in her own words:

‘’At 18, my son David was diagnosed with kidney disease. For the next ten years he required regular three-monthly monitoring at the local hospital. When David was 28 his kidney function had decreased to the point where he needed a kidney transplant. He had a rare form of kidney disease called membranoproliferative glomerulo-nephritis (MPGN) also known as Dense Deposit Disease. In simple terms it means that his immune system was destroying both his kidneys.” 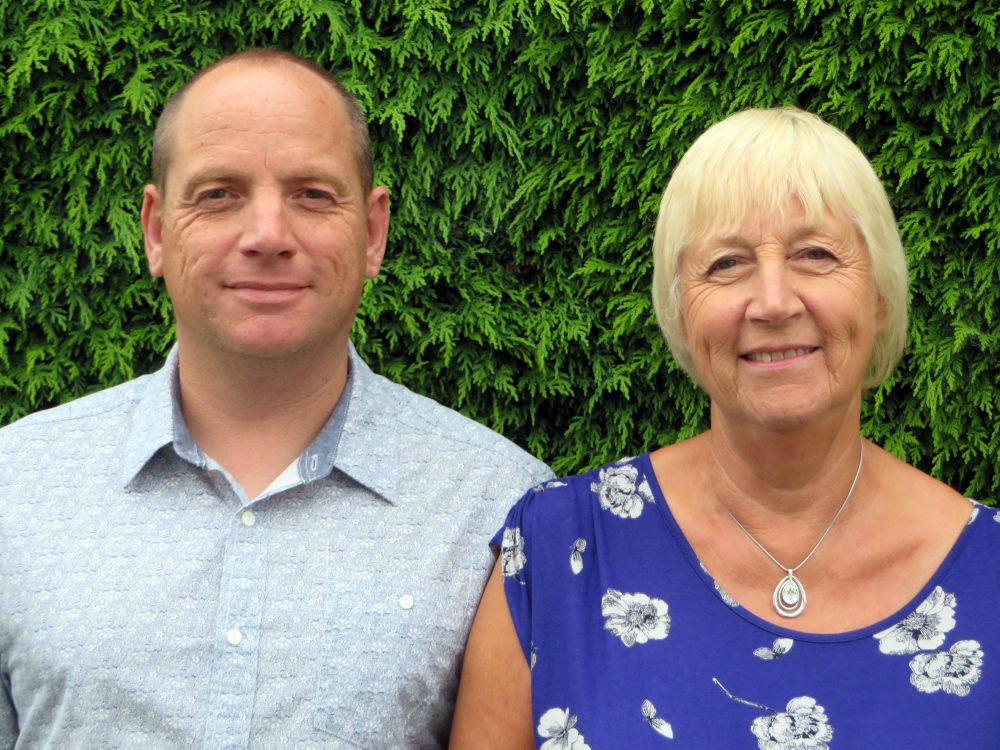 “Myself, my husband and both David’s brothers all offered to be tested as suitable donors. We all would have been suitable but I wanted it to be me. I felt that I had created him and I wanted to repair him. The surgeon had informed us not to expect the kidney to last more than ten years because his condition meant that eventually his immune system would override the immunosuppressants and the transplanted kidney would cease to function. At that time we felt confident that following on from me, my husband and other sons could donate.”

“Six years passed with David in good health, with regular checks in the transplant unit. But sadly, during the seventh year, David was hospitalized three times with very serious illnesses. First bacterial pneumonia over the Christmas, secondly a very serious response to a bacterial infection in the April and finally acute appendicitis in the July. Each time he was hospitalised in the renal unit in Cardiff and had to be taken off his immunosuppressants for the antibiotics to work. Sadly, following the third occasion, the transplanted kidney ceased to function.”

“This was over three years ago. Since then David has been on haemodialysis which he has three times a week for 4.5 hours. With the dialysis and working, life is difficult for him, especially as three years ago his wife Ginny was diagnosed with progressive Multiple Sclerosis. Thankfully they live nearby and my husband and I are retired and are able to help a lot with their six year old son, Joel.”

“My husband and sons had hoped to donate kidneys to David but we have been told that this will not now be possible from another family member because of the antibodies David has built up. Also, for the same reason, there is only a very remote chance of a cadaveric kidney being found to match. David continues waiting on the list, and his father and brother have joined the paired kidney programme.’’

‘’I started fundraising when I realized that there were still so many unanswered questions and so much still unknown about kidney disease. Funds are vital to keep the research progressing. I chose Kidney Research UK for my kidney charity rather than any other because I felt that a significant amount of their funds raised goes to research and, as a family, we need answers and results.’’

Jenny continues to be a very active local fundraiser with her willing band of helpers. So far this year funds have been raised through three very successful events. With his renal unit nurses David climbed Pen-y-Fan, the highest mountain in the Brecon Beacons. He was the only patient to take part and he raised £800 in sponsorship. Jenny organised a pork roll lunch with stalls with the help of members of her Baptist Church in Magor which raised £1,900. She also organised a fashion show where another amazing £2,000 was raised.

Jenny explains how she has successfully raised so much over the years: ‘’I would say that the most effective way of fundraising for those who want to support the charity is to get to know their target supporters and find events that you know they will be interested in and therefore support. I found that people who know me and know David enthusiastically support me. Like me, all my helpers and the majority of my supporters are retired.’’

‘’Our next event will be a flower arranging demonstration with mince pies and mulled wine in December. My cousin’s wife won a gold medal at the Chelsea Flower Show this year and we are all looking forward to it being a very successful event.’’

‘’Our future plans are to continue fundraising in the hope that research will find answers to David and other sufferers kidney disease. Research gives hope, and hope is essential to life.’’

If you'd like to hold your own fundraising event, visit our fundraising pages to find out more.