Cycling 880 miles from John O’Groats to Land’s End – ‘Gav’s Big Jogle’ – in eight days, Gav Clews and friends raise over £8,000 to raise awareness for kidney disease. Gav tells us his story on the remarkable journey across the UK that he and six others completed this year.

“My Dad ‘Al’ suffered from kidney problems for the last few years of his life. I was planning to donate a kidney to him in August this year, but his illness took hold of him before we could perform the transplant, and he tragically lost his battle to kidney disease in January.”

Motivated by his father’s fight with kidney disease, Gav explains: “This charity is very close to my family with the recent passing of my dad. This ride is to honour him as we had planned it to get me healthy enough so I could donate a kidney to him this year.” 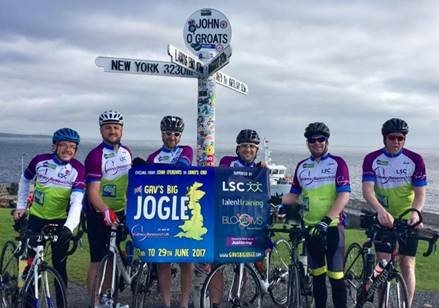 Cycling from John O’Groats to Land’s End became a way for Gav to be able to raise money and awareness for research into kidney disease, helping others fight through this difficult battle.

“I wanted to do something to support Kidney Research UK, so I decided to do the cycle ride to raise a few quid for them, support the great work they do and raise awareness about kidney disease.”

The support and enthusiasm were provided not only from Gav’s close family and friends, but also from Thornbury cycling club (TCC) which celebrated the efforts of the group by welcoming them into Thornbury on day six.

Even further support was shown as donations exceeded expectations. Gav’s Big Jogle ‘Just Giving’ page demonstrated their amazing fundraising efforts as they received an enormous amount of donations – reaching over £8,000!

Between Milnthorpe and Stafford on day five, the team travelled a whopping 114 miles. They were supported along their journey by Stafford’s LSC Nursing & Care team, Talent Training and Blooms. All of which helped support and sponsor the men along their ride.

Gav’s family and friends actively posted updates about the cycle ride on their website and via their Facebook page. They shared their training, support from others and all the pit stops along the way. John Carter, Gav’s friend, accompanied and supported the seven men, hiring a van and driving their nine hundred mile journey, John made sure they reached their final goal of Land’s End. Gav posted: “Waiting at the last stop for our boys – I think our amazing support driver John Carter needs forty winks! Worn out to say the least” alongside a picture of a very sleepy looking driver.

The cycle ride was followed by a celebratory meal, welcoming home all of those involved in Gav’s Big Jogle with open arms at the Staffordshire Bull pub. The welcome home party on July 8 was a huge success, bringing together the whole community to support the exhausted cyclists. It included a BBQ, raffle and entertainment to help raise even more donations towards the cause.

“I am extremely lucky to have such a supportive group of family and friends around me. Without them, none of this would have been able to happen. I just can’t thank my friends enough for pushing through the pain. They didn’t have to do this but they did it for my dad and he would be so proud of us all. This means the world to me and my family and everyone involved. We all did it dad and I'm telling you it was the hardest thing I've ever had to do!” – Gav.