On Sunday 3 July, some 800 people came together to fundraise for kidney research by walking along London’s River Thames, across eight iconic bridges from Tower Bridge to Westminster Bridge and back.

The annual fun day, organised by Kidney Research UK, is held in July and has been running since 1990. It brings together a great mix of people – including dialysis patients, transplant patients and donors – all raising funds for potentially lifesaving research into kidney disease.

Tracey Murray, Head of Community and Events at Kidney Research UK, said: “The turnout was amazing. There was a sea of purple making its way from Tower Bridge, along the River Thames, to Westminster Bridge.“We were delighted so many people joined us on the day, not only to raise vital funds for potentially lifesaving kidney research, but also to raise awareness and visibility of kidney disease.”

Supporters on the day included:

Tanya Taylor and her family, including her 13 year-old daughter Ashleigh who completed the route in her wheelchair. 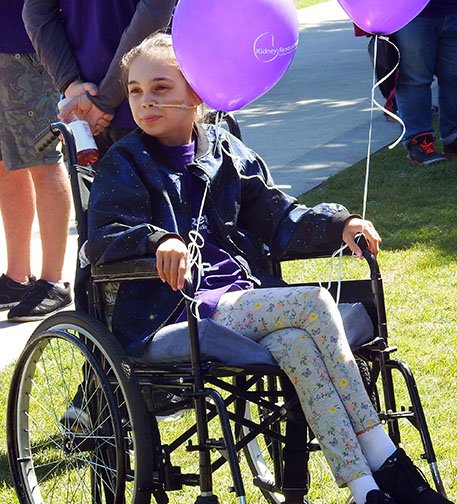 Tanya said: “We had an amazing day on Sunday, we were so happy to see the sea of purple move through London. My daughter Ashleigh had both kidneys removed last September and is on dialysis for 11 hours every night; also her dad had a kidney transplant 24 years ago. They both have nephrotic syndrome (FSGS).

“Kidney research and raising awareness of kidney disease is a massive part of our lives and we were so proud to be part of the event. There was such a brilliant atmosphere and so many smiles! We will definitely be returning and doing our part again next year. Well done to everyone involved and who took part!”

Barry Sutliff and his family did the walk for his son, Charlie, who is in hospital with kidney disease: 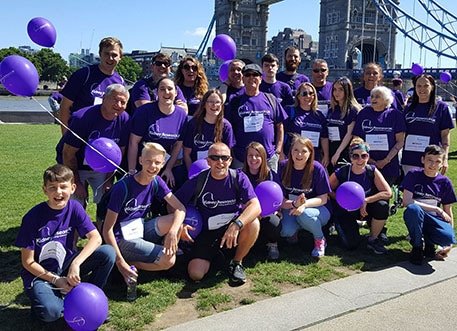 Barry said: “My son, Charlie Sutliff is 16. In 2014, when he was 14, he was diagnosed with Nephrotic Syndrome (FSGS). He’s had his kidneys removed and has been in and out of hospital for the last two years, having tests and treatments. His life’s been on hold really. “It means a lot to all of us to be able to come and do the London Bridges Walk. The whole family has been behind Charlie for the last two years and it’s been great to come together and raise a lot of money for the charity at the same time. We appreciate what Kidney Research UK is doing for my son.”

Congratulations to all who took part. You can see the photos from the fabulous day here.