Janet’s volunteering story began when her dad was diagnosed with chronic kidney disease (CKD) at the age of 82. His health deteriorated and he was put on dialysis, sadly losing his life in July 2011 at age 87 after contracting pneumonia.

Janet decided a year later to run the London Marathon in his memory and began her journey raising money to fight against kidney disease. 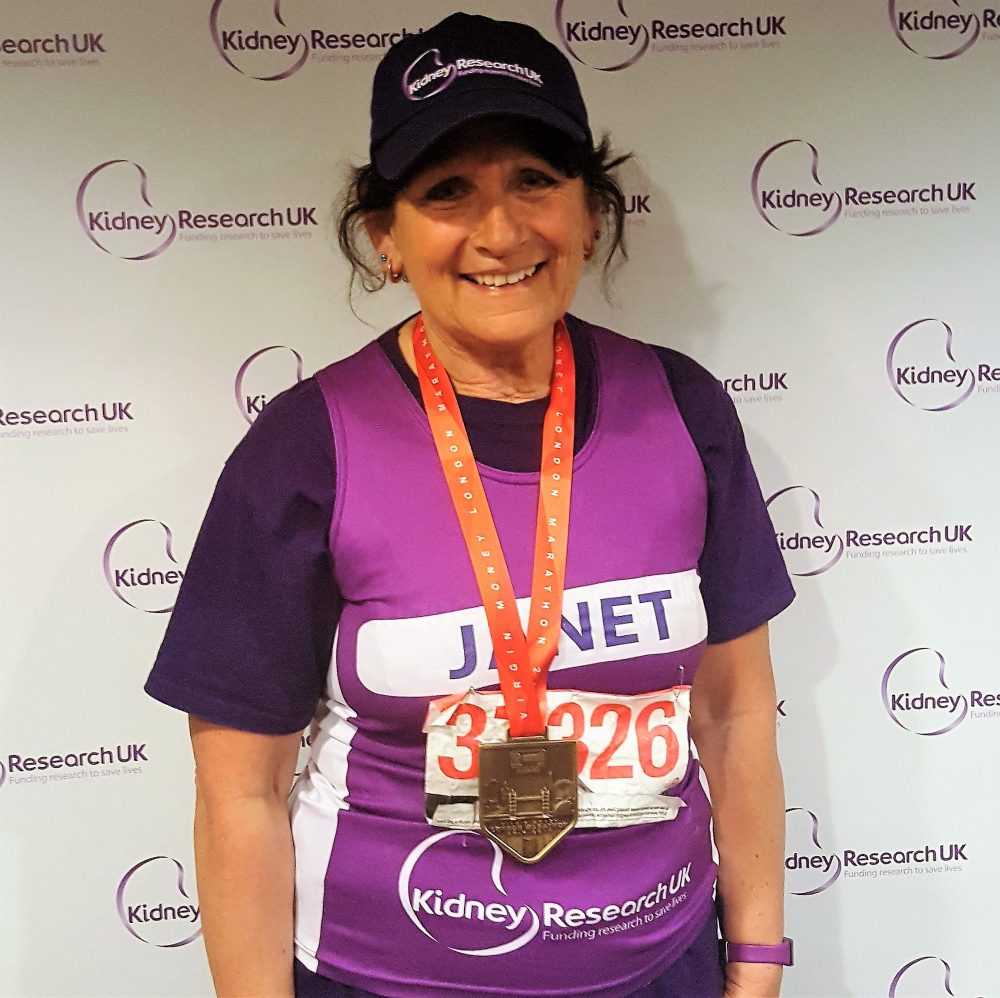 Here’s her story in her own words:

As a proud Irishman, my dad loved a pint of Guinness. He was always full of life with a great sense of humour unless his beloved Aston Villa lost, until he suffered kidney failure after being diagnosed with CKD. You could say my dad was one of the lucky ones, as he didn’t become ill until he was in his 80’s and lived to see his great grandchildren.

I saw my dad on a hospital dialysis machine three times a week for four years. The renal unit became like a home from home and the staff there like extended family. And, although the dialysis meant we had him longer in our lives and we are very grateful for that, I saw dad get weaker and weaker the more he was on the machines.

After he died, I really wanted to give something back. So, in 2012, I began training for the London Marathon: I wanted to run it in his memory. My first time was very special and very emotional for me. I had a picture of my dad on my running vest and felt so proud that I was able to run all those miles for him.

This was really the kick start to my fundraising journey beginning. I set up a JustGiving page and my then employer, Barclays Bank, offered to match my funding up to £750.

Then I discovered Kidney Research UK, and how it funds potentially life-saving research into finding cures for kidney diseases. The charity saw what I was doing and asked me to become a Community Champion for them.

Not only was I running the marathon and raising money, but I began to have other opportunities to fundraise and raise awareness of kidney disease.

I’ve held fundraising and awareness drives in my local supermarkets, including Morrisons, Asda, Aldi and Tesco, by doing bag packing and bucket collections, and have found they are surprising opportunities to meet and talk to other kidney patients or their families and hear their personal stories. I’m now well known by the Community Fundraising Managers in my local stores and find they are receptive to me returning for more fundraising each year.

I’ve also been invited to do presentations at local festivals and Women’s Institute groups, and am getting known in my wider community, which is great!

Since my first challenge event in 2012 I have been fundraising every year. I continue to run the London Marathon and love doing it as it is such a special emotional event – everyone is running for their own cherished causes. For me, it’s a massive challenge every year, but I get a chance to focus on helping others by doing it in my dad’s memory. I feel that it is a ‘my family’ event and that’s such a positive and motivating thing for me. I want to continue running the marathon for as long as I can, as it’s the most rewarding and inspiring thing I’ve done.

I love being a Community Champion for Kidney Research UK. I wouldn’t have thought all those years ago when dad was on dialysis, that I’d be on a journey like this and end up being so committed to and so excited about community volunteering in this way. It’s been a life-changing experience for me.

Over the past five years, I’ve been delighted to raise nearly £13,000 for Kidney Research UK. Research is so important, it’s the key to finding a cure for kidney disease and saving so many more lives. That’s why I am a Community Champion it and will continue to be so!

More than that, it’s thanks to the girls in Kidney Research UK’s office and their incredible support, encouragement and friendliness that I am so committed to the cause. They’ve been amazing. Every time you call them, nothing is too much trouble and they always have time to chat about everything and not just fundraising. They’ve become friends!

Volunteering has been inspiring and rewarding for me in so many ways. It’s been wonderful to make a difference for so many people, doing it in my dad’s memory.

Find out about how volunteering can make a huge difference to people’s live.

Or if you’d like to be involved with our challenge events, explore our event pages and if Janet’s story has inspired you to consider running the London Marathon.