Hannah Hughes, 14, watched her mum be very ill with chronic kidney disease over a period of about five years. She watched her mum become more and more tired, take medicines that made her sick, saw her mum having to have dialysis and a neckline be put in. Hannah also saw relatives come forward to be tested for a kidney match and finally, in February 2016, she saw her mum have successful transplant surgery.

She saw her mum’s life saved and she wanted to give something back to all the doctors, nurses, researchers and others who had helped her mum and who are trying to find a cure for kidney disease. So she chose to do a sponsored 10k swim for us here at Kidney Research UK and she’s raised an amazing £975!

Hannah Hughes and her family

Here’s Hannah’s story in her own words:

“It was very difficult for my dad and the family when mum became ill. As she got worse, she was spending more and more time at the hospital. When we went on holiday to Cornwall, mum was really ill and spent the week in bed and that made me really scared.

“Mum’s kidney function dropped from 18% to 5% and during this time my grandad (mum’s dad) and my uncle Mike were tested. Grandad was a good match for a transplant, but after having all of the tests he suffered a minor heart attack and couldn’t proceed. Uncle Mike went on the exchange programme, but after three attempts a match couldn’t be found, so mum had to go on dialysis. Her neckline was really frightening and looked so painful. I looked after my little brother a lot as mum and dad spent so much time going back and forth to the renal unit at Liverpool hospital.

“But then we had some good news. My aunty Helen, who lives in Ireland, was tested and was found to be a match. The transplant surgery took place early last year and we were all so relived and excited. Mum’s life was saved and she came back to us.

After it all, I decided I wanted to give something back. The doctors and nurses on the renal ward in the Liverpool and Arrowe Park hospitals were fantastic as was the dialysis unit in Clatterbridge. And I know that your research is so important, too, in trying to find a cure.
“So I figured that the best way for me to say thank you was to raise money for people in the future who will be in the same position as our family was in; to raise as much money as I could. When my dad suggested doing the sponsored swim, I was super excited.

“I’m a member of the Birkenhead Swimming Club and Liverpool City Squad and swim regularly but the most I had swum at one go before the event was only about 800 metres. When dad said 10,000 metres was going to be 400 lengths I knew it was going to be a massive challenge – probably the hardest physical activity I had ever done! I had to do a lot of training both mentally – as my confidence wasn’t very high in the run up – and physically. I had to do some long distance swims to help prepare me and boost my confidence. I was really helped by the encouragement from friends, family and other people around me during that time.” 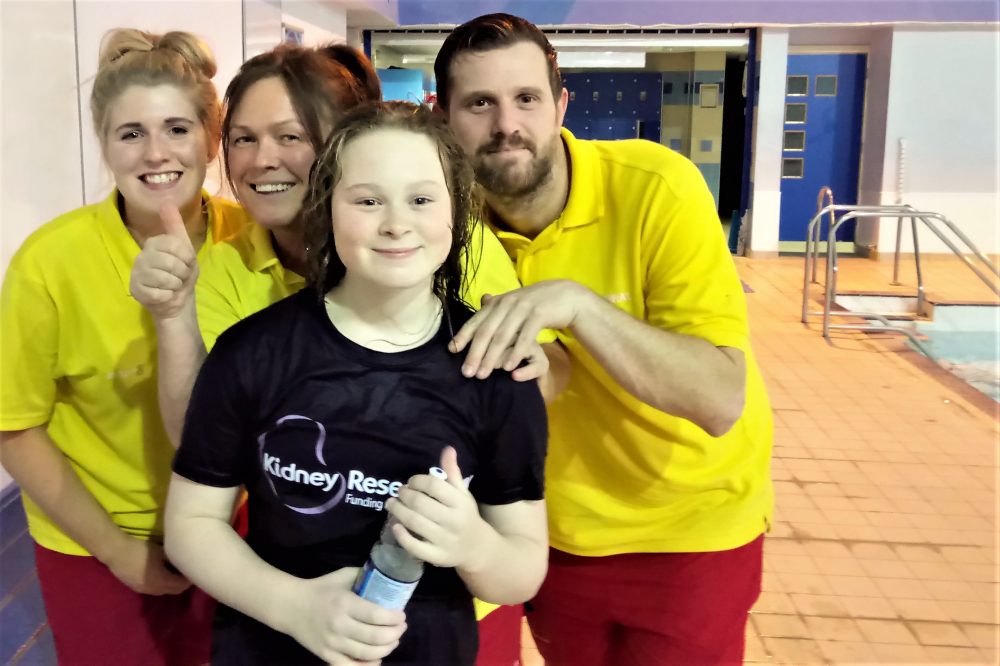 Hannah Hughes, with lifegaurds at the pool

On 12 November 2016 Hannah completed her 10k challenge in under six hours, cheered on from the poolside by family and friends throughout.

“During the event I did get out a few times thinking I can’t complete this. I hit a few brick walls. Every time I got out for a break I thought this is going to be impossible to complete, but then I thought I’m doing this for the people who saved my mum’s life, so I think I can face a little bit of pain to say the biggest thank you ever! And I did it, I really did it, and in under six hours!

“So why did I choose to fundraise for Kidney Research UK? Your work is all about doing research that tries to make people better and to save lives. I really want to see a permanent cure for kidney disease; it’s so horrible and can ruin people’s lives. But my mum’s life was saved and, if a little bit of money raised can help save other people and not let them go through what we did, then it was a good thing to do. Also I wanted to share the happiness we’ve had since mum started to get well again. I saw what an unhappy family was like with kidney disease and it wasn’t nice. Giving something back that may help to find a cure was really, really important to me.

“You have changed our family’s life and will help a lot more families to come. Some people are mentally scarred for life by the aftermath of kidney disease. Thanks to you guys, the aftermath for me and my family is only temporary and not permanent.”

If you’d like to support Hannah and help her raise even more money, see her Just Giving page.

If you've been inspired by Hannah's story, find out how you can get involved.