David Prosser is a Chartered Accountant by training. In 2013 he left the City after a career of 32 years working for PricewaterhouseCoopers (pwc), where he was a Senior Partner. David is Chairman of the Board of Governors, The Princess Helena College, near Hitchin, and a Trustee for Kidney Research UK. On retirement he took a Masters Degree in Creative Writing (The University of Cambridge, 2014-16) and is currently studying for an MA in Dramatic Writing from Central Saint Martins College, London. 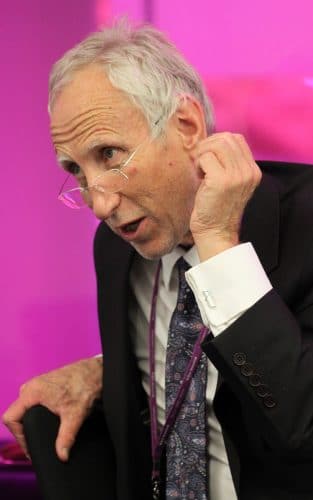 David Prosser’s kidney has just celebrated its 30th transplant anniversary. Thirty years ago his sister, Sylvia, donated a kidney to him after he had been ill for four years with kidney disease.

Today David, a Trustee at Kidney Research UK and, as a transplant patient himself, is passionate about funding the right research into what is still an incurable disease, to save people’s lives.

Before his illness and transplant surgery in 1987, David didn’t think very much about research into any medical condition. He didn’t understand how research was commissioned or funded or the connections between research in the lab through to patient therapies in a clinical setting.

In his own words, he ‘stumbled’ across Kidney Research UK while working as a partner of pwc in London.

“One of my corporate clients was also a trustee at Kidney Research UK. He talked to me about the work of the charity and of the respect he had for the professors and researchers he had come across. I could see the passion in him, how much he thought it was worthwhile and I became intrigued.”

Even in such a short space of time, I’ve seen the charity develop, become more strategic, raise more income, and fund more research. But there is still so much more to do.
As David personally started to explore the work of the charity he found himself shocked that most of the research was funded by the public. “I think I naively assumed that the government or industry initiated research; I imagined it just happened. But the more I discovered about Kidney Research UK, the more I felt I wanted to contribute something into the mix – my time, skills or expertise.”

In 2014 there was a vacancy to the charity’s trustee board and David was appointed.

“At my first meeting, which went on for hours and which, if I’m honest I was dreading a bit, I heard about some of the research that was being funded and the potential of that to save lives. I heard about the passion and energy of the supporters and fundraisers who do a vast variety of activities to raise money for a cause they believe so deeply in. I also saw that the charity involved patients at the heart of its strategic decisions. And I simply came out energised. I was hooked.

“Very quickly I discovered Kidney Research UK is a well-run organisation that delivers results. It is objective-led and cares enormously about getting research funded. I found it is relentlessly efficient with its income – every pound delivered to it will result in something positive – and that drew me in further. I wanted to be able to contribute something to that drive and passion.”

In 2016, Kidney Research UK was one of a number of organisations pioneering the UK’s first renal research strategy. The strategy outlines aims and recommendations to improve the health and welfare of kidney patients through impactful kidney research.

“One of Kidney Research UK’s greatest strengths is its ability to break down barriers and get people to meet, to talk and then connect. I’ve seen this at first hand when the charity draws together scientists, researchers and healthcare professionals with politicians, industry leaders and business. It is a determinedly influencing organisation which is very good at synthesizing community and agreeing the things we can agree about. For example, last October we drew together some 35 clinicians, scientists, researchers and patients to explore current UK research into renal regenerative medicine, to discuss challenges and barriers to progression, and to identify opportunities for mutually agreed working and partnership. It’s still early days but out of this is a fantastic opportunity to build a UK-wide collaborative network for regenerative medicine where we can share ideas, technologies and our latest research findings.”

David has now been an active trustee board member of Kidney Research UK for nearly three years.

“Even in such a short space of time, I’ve seen the charity develop, become more strategic, raise more income, and fund more research. But there is still so much more to do. We can only fund about half of the projects that we’d like to. Kidney disease still has no absolute cure and there are more lives to save.

“I will not forget that sense of feeling permanently wiped out when I was on dialysis. Don’t get me wrong, it was a life saver, but the restrictive diet and the tie the machines creates presented challenges. There was a real feeling of treading water and that was very worrying for my wife, for my wider family and for me as a twenty-something. My sister Sylvia’s kidney saved my life. The overnight transformation was magical, and without the transplant my three daughters wouldn’t have been born. Happily, after recovering from surgery, Sylvia’s suffered no ill effects at all. My amazing good fortune makes my experience the exception, when it ought to be the rule.”

Find out more about organ donation.